The Grand Sophy by Georgette Heyer 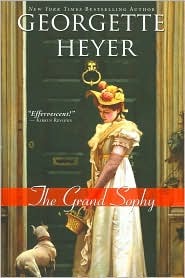 When the Classics Circuit featured Georgette Heyer in the author spotlight back in 2010, I pooh-poohed the Regency romances and chose a mystery instead.  It was good but not nearly on the level of Agatha Christie, so I kind of gave up on her -- I'm not much of a romance reader and I'd heard that the Regency stuff was Jane Austenish, and I am a total snob when it comes to Austen.  I rarely read any of those sequels/prequels/readalikes, et cetera.  They just never measure up to my beloved Jane, and I get annoyed when authors borrow characters that someone else has created.  [Note:  I'm not trying to belittle anyone who does like such books, it's just my little quirk].

Anyhow, my Jane Austen book group is meeting this weekend, and this time around we decided to try some of Heyer's Regency books.  Honestly, we have to be really creative to keep it fresh -- Austen only wrote six complete novels, and we've been meeting every month for almost three years, so you do the math.  I don't think we've repeated a book yet -- we stretch it out with movie viewings, related books, and, yes, the occasional sequel.  The library didn't have enough copies of any single novel, so just for fun we decided to each just pick one and we can do a general discussion, kind of like a series of mini-booktalks.  So I chose The Grand Sophy, which is supposed to be one of the best.  And I am SO sorry I didn't read Heyer before, because it was a hoot!!  I was delighted.

In a nutshell:  Sophy Stanton-Lacy is the twenty-year-old daughter of Sir Horace, a widower and some sort of British diplomat.  After years of dragging his only child around the continent, he's going off to Brazil and can't take her along or leave her unattended, so he foists her off on his sister, Lady Ombersley, who lives in London with her spendthrift husband and a gazillion children, some of whom are about Sophy's age.  They're hoping they can get Sophy married off before he returns from Brazil, and Sir Horace has plenty of cash to foot the bill.

However, Sophy is no shrinking violet.  Within weeks of her arrival, she has turned the household upside-down and is rearranging everyone's lives -- she's trying to prevent two of her cousins from making unsuitable matches -- her cousin Cecilia is in love with a poor but aristocratic Byronic-type poet wannabe, and her older cousin Charles from marrying a shrew named Eugenia.  Charles is independently wealthy since his great-uncle made him the heir, so he's paid off all his father's debts and is calling all the shots.  Naturally, he and headstrong Sophy clash from the beginning.   Will this be a Darcy/Lizzie romance?  Will Sophy find a suitable husband for Cecilia?  All will be revealed, naturally!

Sophy reminds me a lot of Emma Woodhouse -- if Emma was in London and had moved in with, say, Mr. Darcy's family (with way more kids) -- and if he was engaged to Caroline Bingley!   Naturally, the writing is not on par with Austen's satire, but it's pretty funny, and Heyer packs in a lot of Regency vocabulary which shows how much research she did on the period.   Her attention to detail is very impressive.

The plot itself was fairly predictable, and I found the characters a little flat.  And I have to admit the ending was a little silly -- it sort of reminded me of a Regency screwball comedy, a bit like an Oscar Wilde farce.  However,  I really enjoyed spending time with the characters in Sophy's world.  It was a fun, light read, and a nice contrast to the rather depressing Zola novel which I finished the week before.  It's definitely a potato chip book, but a very high-class one. So, I guess you could call it a quality potato chips book.  Quality Regency potato chips?  Anyway,  I can see why her books were so popular, and why they've endured.  Heyer wrote more than 30 other Regency romances, most of which are available at my library.
Posted by Karen K. at 9:24 AM