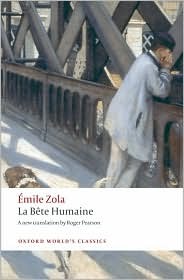 It's actually been several weeks since I finished this book.  I had just been promoted to my new job, so I had a week of orientation, which I found exhausting, then I started my REAL new job, and had to go back to Spanish class. . . and I actually spend time with my family.  Needless to say, this book review kind of got lost in the shuffle.  Which is a shame, really, because it was a really engrossing book, and I feel like it deserves a review.

So,  La Bete Humaine is my fourth read in Emile Zola's twenty novel Rougon Macquart cycle.  Somehow, these novels all feature inter-related characters, but this isn't the sort of series which requires readers to begin at the beginning.  (Zola purists, please refrain from howling).  La Bete Humaine loosely translates to The Human Beast but is also sometimes translated as The Beast Within.  Basically, it's the story of murderers and what does or does not drive them to kill.   Are people born murders, or can good people be driven to it?  Are we really just animals?

There are several intertwining stories in this novel, which is set against the backdrop of the Paris-Le Havre train route, and its employees.  Monsieur Roubaud is a deputy station master, and he and his wife, Severine, live in company housing with several other railway employees.  A chance remark about Severine's godfather, the wealthy and influential Monsieur Grandmorin, raises Rouboud's suspicions, and he begins to suspect he was more than her patron after her parents' deaths.

Meanwhile, a railway engineer, Jacques Lantier, is harboring murderous thoughts of his own.  He is convinced that he can never have a healthy relationship with a woman, because all he can do is fantasize about killing them.  Jacques is the son of Gervaise, the main character in Zola's novel, L'Assommoir (The Drinking Den), and the brother of Etienne from Germinal, and of Claude Lantier, the main character of The Masterpiece. (However, it isn't necessary to have read these novels, as they all essentially stand alone).

Then there are some other characters who may or may not have killer instincts.  Jacques goes to visit his Aunt Phasie, who lives in a small house right next to the railway line near Le Havre.  She's chronically ill and believes that she is being slowly poisoned to death by her second husband, who is forever searching for her hidden cache of money.  Phasie has a daughter, Flore, who is in love with Jacques.  They're still mourning the death of her youngest daughter, who died under mysterious circumstances which may involve characters previously mentioned.

All of these people leave fairly miserable lives on and around the railway, which is so masterfully described, that, like the mines of Germinal, it becomes an important character in the book.  Jacques and his fellow railway men are constantly describing the engine by its name, "La Lison."

In the past, I've referred several times to literary characters as fascinating train wrecks.  It may be a terrible pun, but it couldn't be more apt in this case.  None of these characters are particularly likeable, but once again, Zola manages to intertwine their stories in such a fascinating manner that I couldn't wait to find out what happened next.  Their lives are pretty sordid, with affairs, theft, murder, and gossip, and Zola manages to get in some pretty nasty barbs about the corrupt judicial system.  I wouldn't really want to meet any of these people, but I could hardly put the book down once I got into it.  It must have been incredibly shocking when it was first published in 1890, and the ending is one of the most emotionally draining things I've read in a novel.  It's not particularly explicit for the twenty-first century reader, but I was still aghast at the ending.  I don't know if it's considered among the best of Zola's novels, but I don't think I can ever forget it.
Posted by Karen K. at 7:13 AM