The Fountain Overflows by Rebecca West 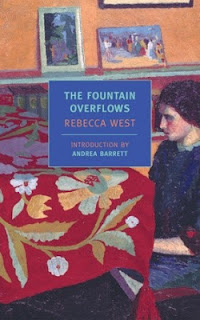 I'm very happy to have finished this book.  Not only is it a book off my own TBR shelves, it's also an NYRB Classic (of which I have a healthy stack, all unread) but I've seen it all around the blogosphere and it seems to be universally liked.  I did like it but it really wasn't what I expected at all.

The Fountain Overflows was described by someone as Jane Austen-ish, but I personally wouldn't make that comparison at all.  In a nutshell, it's the story of the Aubreys, a family living in genteel poverty in London around the turn of the century, told in the first person by Rose, one of the four children.  Their father, Mr. Piers Aubrey, is a brilliant writer, but he has trouble holding down jobs and managing the family's money; specifically, he has a weakness for the stock market and the family is forced to make a lot of sacrifices.  Their mother was once a brilliant pianist who gave up her career when she got married, and she's doing her best to train her children to be musicians as well.  Unfortunately only two of her children seem to have inherited her musical ability and the necessary discipline.  The oldest daughter, Cordelia, is convinced she's a talented violinist, but the rest of the family believe she's really a hack with no artistry, and they're always sneering at her.

There's really no plot to speak of in this book, it's basically the story of Rose's childhood, told in little vignettes about various incidents in her life.  Some of them are kind of mysterious or a little creepy -- there are a poltergeist, a possibly abusive husband, an accused murderess in the supporting cast -- but most of it is a little sad.  Their mother is obsessed with making them into good musicians, their father is brilliant but hopelessly irresponsible.  It's sort of like I Capture the Castle, which I love, and like the father in that book, I just want to shake him and tell him to snap out of it and take care of his family.

It is an entertaining story, though I did find it a rather dense read.  It's about 400 pages, yet in my edition, an NYRB classic, the margins are very narrow and the print is fairly small.  It's 17 chapters but they took awhile.  It was published in 1956, but the style of writing made it seem older, and I guess that made it a slower read as well.  It seemed to have been written around the turn of the century, not just set in that era.  I guess this would be a good candidate for the Slow Books Manifesto.

"Papa was always happy when he was engaged in certain activities.  Of these the one which gave him greatest pleasure was his lifelong wrestling match with money.  He was infatuated with it though he could not get on good terms with it.  He felt towards is as a man of his type might have felt towards a gipsy mistress, he loved it and hated it, he wanted hugely to possess it and then drove it away, so that he nearly perished of his need for it.  But he knew almost as great joy if he were conducting a campaign  against some social injustice, particularly if it were the rights of property that had been dealt with unjustly."


Maybe it's just me, but that seems much more like a Victorian novel or maybe Edwardian.  The writing was very good and I liked the characters, but it isn't a book I could rush through.  But I'm happy to have read it and look forward to reading West's The Return of the Soldier, which is another of my Classics Club selections.  This book also counts toward my TBR Pile Challenge, so I'm happy about that too.
Posted by Karen K. at 8:42 PM