So, tonight was World Book Night!  I was lucky enough to be selected to be one of the givers, and it was fun, but it was actually tougher than I thought.  (I was also fortunate to get my first choice of book, The Book Thief by Marcus Zusak.)   I'm not done with my book giveaway -- I still have about six copies of my book left -- so if anyone has any suggestions, I'd love to hear them.

I probably should have done more research first, I think my biggest problem was my choice of location.  I live in San Antonio, not too far from a nice outdoor shopping area which has a movie theater, Starbucks, and a now-defunct Borders bookstore.  I thought this would be a GREAT place to hand out free books, since there's no bookstore anymore!   I was wrong.

First of all, it never occurred to me that people at the mall might not want free things -- and that there would be bureaucracy to deal with.  Apparently, to pass out something on the mall property, I needed to fill out paperwork and get permission, which I should have done weeks ago.  What was I thinking?  One retailer did suggest I ask at the Starbucks, which was a great suggestion -- the manager was really nice and said that Starbucks was very accommodating for things like that, and I'd have no trouble at any of the locations.  So, Starbucks was my first choice, and I decided hitting up several coffeehouses would be a great way to do this.  There are four Starbucks within a five-mile radius.  I also took my kids -- when in doubt, ask a cute ten-year-old girl to do your bidding (with supervision, of course!) 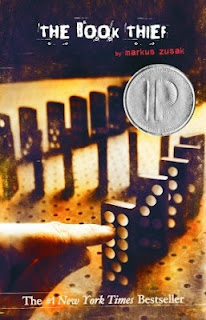 At the first Starbucks, we struck out completely -- there were only three people deep in conversation, who did not seem receptive or friendly.  We went to a second location, and gave out a bunch of books, including one to an employee who said he was actually dyslexic.

I ran into problems at the third Starbucks -- everyone seemed hard at work and engrossed in their laptops, and everyone I talked to loved to read!  I started to feel really self-conscious and got discouraged, and decided I might be better off giving them away at the library where I work tomorrow.  On the way home, my girls wanted to do a little shopping, so we stopped in at one last store before we left.  I started chatting with some of the employees, and one lady said that she really liked to read, but that she had another job at a Wal-Mart, and hardly any of her co-workers read books, and she'd definitely give copies to them, so I gave her a couple of books.  Hopefully, it isn't bad to enlist other people to spread the joy of reading.

Officially, World Book Night is today, April 23rd, but I guess it's all right to keep passing books out the rest of the week.  Did anyone else sign up this year?  Any suggestions about good locations?  How did you approach strangers?
Posted by Karen K. at 10:45 PM