Last spring, I was lucky enough to score a lovely new copy of South Riding from Virago (the U.K. edition!) during the Virago Reading Week hosted by Thomas at My Porch.  That was last April!  It hasn't been on my shelves long enough to qualify for TBR Shelf Challenge, but I've been wanting to read it for awhile. This is another of those between the wars, British/Virago/Persephone books that has been on my to-read list for what seems like forever (well, it's actually a year, since January 2011 according to my Goodreads list).  But the BBC adaptation has been on my DVR since it aired last May, since I stubbornly refused to watch it until I read the book.

So.  South Riding is the story of a fictional town in Yorkshire.  It starts during the Depression, in 1933. Most of the story is centered around two characters:  Robert Carne, the local squire, a conservative farmer who married the daughter of an aristocrat and has fallen on hard times.  His wife has spent years in mental institutions, which is draining his finances, so he's struggling to keep the family estate, Maythorpe, afloat.  He has a teenaged daughter Midge who is quirky and antisocial.

The other main character is Sarah Barton, the new headmistress of the local girls' school.  She grew up poor in the area, and has returned back to her roots as a successful career woman, hoping to make a difference to the community.  She's fairly radical and of course she locks horns with the local gentry, i.e., Robert Carne.  The story takes place over a year or two in South Riding and the surrounding area.  The story includes births and deaths and heartbreak,  how one person's life can impact a whole community.

It's a fairly long book, more than 500 pages, and begins with an enormous list of characters which I promptly ignored, for fear of spoilers.  South Riding reminded me a bit of Middlemarch or a novel by Trollope, because it has multiple intertwining storylines and characters, centered around a fairly small country town.  What I really liked was that the characters are from all different backgrounds and situations -- it's not just the local gentry, but the small business owners, the local families living from hand to mouth, and even the crooked politicians who are manipulating public works for their own benefit.  (Actually, the political part of the story was my least favorite, and I honestly skimmed over some of those bits).

Winifred Holtby created some wonderful, strong characters, who are both flawed and interesting.  None of them are perfect, most of them mean well, and some of them are really tragic.  They all seemed very real and I can absolutely understand why the BBC adapted it into a TV series, though I've heard fans of the book have been somewhat disappointed.   Now that I've finished it, I should probably watch it and clear it off the DVR queue -- but in a way I don't want to because I enjoyed the book so much.  I don't want it to change how I imagine the book and the way all the characters look.  Does anyone else have this problem?  If I watch a movie adaptation of a book before reading it, I always imagine the characters to look like the actors; if I read the book first, I'm usually disappointed.

I do have two other books by Winifred Holtby on my TBR shelves, Poor Caroline which is an older Virago edition; and The Crowded Street which is a lovely Persephone.  I know there are lovely new Viragos of her other books covers similar to my copy, which I think is my favorite of the books I've read so far this year.  I love that it's a reproduction of a vintage travel poster for Yorkshire -- so much nicer than the TV tie-in edition.  I'm tempted to buy the others just because they're so attractive: 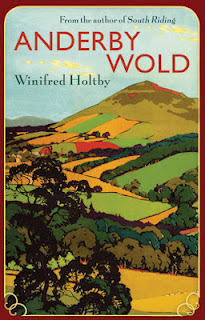 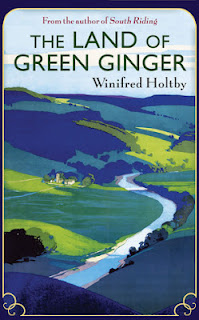 Has anyone read these?  Are they as good as South Riding?