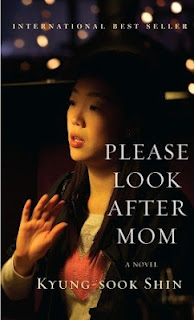 Please Look After Mom was the library book group selection for my evening group this past month.  I chose it because I'd heard a lot about it last fall when it was published in America.  I don't read that many books in translation, though I'd like to read more, and I'd never read a Korean book before, though I have read books set in Korea.  I thought this would be a good choice for the group to read during Asian-Pacific Heritage month.  It wasn't until later that I realized that we'd be discussing it the week before Mother's Day.

If you don't know anything about it, here's the setup:  told from different points of view, this is the story of a family's search for their missing mother.  The sixty-something parents are traveling by train to visit one of the adult children, and in the busy Seoul train station, the parents get separated in a crowd.  The father accidentally gets on the train without the mother, not realizing she's left behind.  She seems to have vanished without a trace, and the book is about the search for the the mother, and the impact of her absence on the family.  It's told in four sections, from four points of view.

This book really resonated with me for a couple of reasons.  First, I lived in Japan for a couple of years, and though the two cultures are obviously different, there's enough similarity that I was able to picture a lot of the scenery, both in the countryside and in the cities.  I could absolutely believe the part about the parents getting separated -- I've been in the Tokyo JR (Japan Rail) train station during rush hour, and it's overwhelming.  I've seen how crowded the platforms are and how many people are trying to get on those trains.  Several times I was traveling with my children, who were quite small, and it was horrifying to imagine getting separated from them (though Japan is an extremely safe country for tourists; I'm not implying we were ever in danger.)

Secondly, my husband is Asian, and even though his mother has very little in common with the missing mother from the novel, I could absolutely relate to this mother's devotion towards her children.  For example, in one scene in the book, the mother is having dinner with her eldest grown son, and she keeps taking the best pieces of meat out of her own bowl and putting them in his -- my mother-in-law used to do this all the time.  And like the the woman in the story, my in-laws would do absolutely anything to help her children with their education.  She's not like the tiger mother that published that book last year, but there's definitely a lot of commitment to higher learning in Asian families.

This book was really well-written and the story really captured me, but I did have a little trouble getting used to it because it's written in the second person.  It's not a writing technique I encounter much, and it's really not my favorite.  The different narrators always used "you" and it took me awhile to figure out who they were talking about.

I liked how this book slowly revealed different layers of the characters, especially the mother.  The author really showed how little we know about our own family members and what made them they way they are, especially the mother.  However, I wasn't really thrilled with the ending.  Some of it seemed very unresolved and even though I can sort of assume what happened, a lot of it seemed unexplained.  Overall I did really like it and would definitely recommend it to anyone who wants to read Asian literature in translation.  It was a really good book selection for a discussion group so I'd highly recommend it for those also, as long as you can get enough copies which is always a problem in my library system.
Posted by Karen K. at 9:42 AM