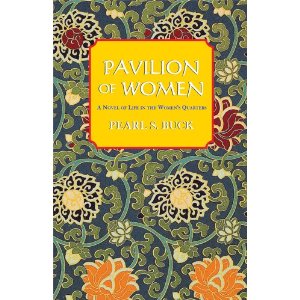 I'd wanted to read another book by Pearl S. Buck since I read The Good Earth a couple of years ago, but just never got around to it.  After reading an excellent post about her book Peony by Eva at a Striped Armchair, I started looking through the library's catalog to see if there were enough copies of another book besides The Good Earth, which I've discussed with two different groups already.  Luckily, we had about nine copies of Pavilion of Women, plus I was easily able to get another for myself from Paperback Swap.

This story has a really interesting premise:  On her 40th birthday, Madame Wu, the matriarch of a large wealthy Chinese family, has decided that she is going to get a concubine for her husband.  This will have serious repercussions, as it will upset the balance of the entire extended family who live in the house, including her two daughters-in-law and four sons, two of whom are unmarried. Madame Wu needs to get one of those sons paired off quickly, and decides that an English tutor would help him to find an educated bride.  She finds a European monk, Brother Andre, and his presence at their compound begins to affect both the son and Madame Wu herself, in her philosophy about religion, education, marriage, and life in general.

I really enjoyed this book.  It was a fast read, and I found the characters and the family dyanamics very interesting.  It's one of Buck's few books about characters who are not poor, and I found it very interesting to learn how this upper-class Chinese family functioned in the early part of the 20th century, just before the revolution.   There are a lot of books about Asians written by Westerners nowadays, and there are some good ones, but I really feel like Buck had a very authentic viewpoint for much of the book, since she did grow up in China among Chinese people. I did think Madame Wu was a bit too perfect, and the ending was a bit preachy for me, but overall I really liked it.

This book was the May selection for my library's book club, and I have to say it was a big hit.  There was a lot to discuss about the role of women, religion, poverty, and the rumblings of communism in the story. Another big plus at the meeting was the appearance of Amanda from Ramblings, who was finally able to attend!  I've been attending her classics book group for more than three years, so it was really fun to have her come to a group that I was hosting.  She liked the book too, and if you want to read her review of Pavilion of Women, click here.

If you're looking for an interesting book about Chinese culture, and you've already read The Good Earth, I would recommend this book.  I do have several others of her books on my TBR shelves, including some of which I've picked up at library sales for as little as $1.  Has anyone read any other books by Pearl Buck?  Which do you recommend?
Posted by Karen K. at 8:30 PM