Our Mutual Friend by Charles Dickens 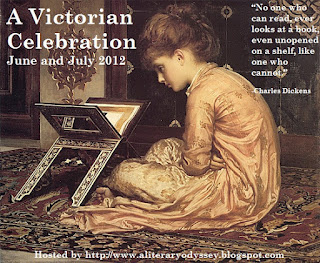 Welcome to my first post of A Victorian Celebration, hosted by Allie of A Literary Odyssey!   I hope you'll visit her website to see all the Victorians people are reading this summer.  I have a lot of Victorians to read and review, so I'm very excited about it.  I'll be posting all summer long and I'll even be hosting a giveaway of my own, so stay tuned.

On to my book review!  I'm slowly working my way through the novels of Charles Dickens, and with Our Mutual Friend I have finished eleven of his fourteen major completed novels.   It's the last novel Dickens completed before his death, and I was worried it wouldn't hold up to some of my other favorites.  To my delight, OMF is now among my favorites.

Without too many details for fear of spoilers, here's the setup of the novel:

One evening, a man named Gaffer and his daughter Lizzie are out on a boat on the Thames River, when they find a dead body.  Gaffer makes his living basically scrounging whatever he can find floating in the river (frequently, it turns out, from drowning victims).  It turns out this particular dead man is John Harmon, the heir to an enormous fortune.  Harmon had just returned from abroad to claim his inheritance, which came with the strict stipulation that he marry a particular young lady chosen by his father, and whom he had never met.  Instead, the inheritance now goes to Mr. and Mrs. Boffin, faithful servants to the wealthy Mr. Harmon, who made his fortune from garbage heaps. 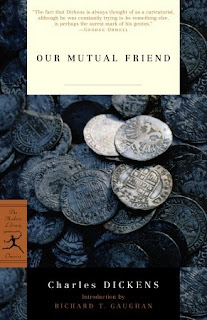 Now that the Boffins are newly wealthy, a host of people with questionable motives start to circle like vultures, trying to get a piece of their wealth, including Mr. Wegg, a poet who is paid to read to Mr. Boffin; Mr. Rokesmith, his new secretary; and Bella Wilfer, the young lady who was the bride-to-be, now not quite a widow.   It also explores the murder of Harmon and the intertwining fates of the Gaffer family, who become linked with the Boffins and the mysterious case.  This book also includes romance, humor, and satire.

Like Martin Chuzzlewit, much of the plot is based on people's greed, though it's a very different story.  Like Bleak House, it's a murder mystery.  Typically for Dickens, the characters are a mix of the grotesque, the comic, and the angelic ingenues -- this time, there are three young ladies eligible for the part of Dickens' heroine, though I found two of the three much less irritating than Dickens' typical saintly young ladies.  I did end up loving several of the characters, and couldn't wait to find out what happened to them next.  I was lucky enough to get the Naxos audiobook version of this from my library, and listened to quite a bit of it in the car on the way to and from work.  However, I got so caught up in the story I also had a print copy going as well, because some days I just couldn't wait to find out what happened next.

I really enjoyed this novel, though like Dickens' later works, it does have a lot of intertwining plots and characters to keep track of -- at one point I started a list, and I think I lost count at about 40 characters.  There were a few side plots I didn't care much about, but I do believe if I knew more about English politics and history I would have appreciated them more -- they were mostly political satire about the workings of Parliament.

Years ago, in college, I passed up a chance to take a course on Dickens in favor of Tolstoy, simply because of the reading load -- I think there were three or four novels for Dickens, and when I added up the pages it was more than 2000 pages for an eleven week class (we were on quarters).  In the Tolstoy class, it was about 1300 pages for War and Peace and that was pretty much it.   I'd never read any Dickens and was so overwhelmed I chickened out and registered for Tolstoy instead.  I liked War and Peace but I'll always regret not taking Dickens when I had the chance.

Well, I'm making up for it now.  I loved Our Mutual Friend, and it's now one of my favorite Dickens novels.  I only need to read three more before I've finished them all -- The Pickwick Papers; The Old Curiosity Shop; and Barnaby Rudge.  Then I'm going to read The Mystery of Edwin Drood and I'll have completed them all!
Posted by Karen K. at 8:37 AM