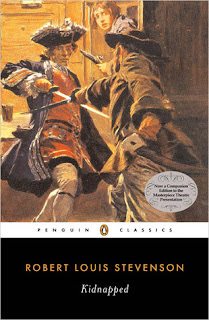 This book kind of fell into my lap a couple of weeks ago at the library.  Although I was hoping to read a children's classic during the Victorian Celebration, this book was not on my original list -- I still have The Water Babies and At the Back of the North Wind waiting on the shelves.  However, I was shelving books at the library and I noticed this one, which had a really nice cover.  And since I had another copy at home, (though a different edition) I could kill two birds by reading a Victorian book and a book off my own shelves.

Anyhow.  This book is both a Victorian and a historical fiction.  Robert Louis Stevenson, a Victorian writer from Scotland, was writing about a character set in Scotland during the 1750s, after the Jacobite revolution.  The story begins with young David Balfour, the poor son of a teacher who is now an orphan after his father's death.  On the advice of the local minister, he travels on foot to meet his long-lost uncle, who was estranged from his father and is living like a miser in a great estate.  Instead of being pleased to see his long-lost nephew, curmudgeonly Ebenezer first tries to trick him into falling down a tower, then hustles him off onto a ship to be sold into slavery in the Colonies.  (I can't really count this as a spoiler, since the title of the book is, ahem, Kidnapped.)

However, things don't work out as Uncle Ebenezer plans.  The ship is full of nasty characters, but after hitting a small boat, they pick up the only survivor, a Scotsman named Alan Breck.  David allies with Alan and they have lots more adventures together while trying to prove David's birthright, including shipwreck, mistaken identity, and hiding from redcoats.  There's lots of tramping about in the woods, hiding under heather, and avoiding shots from muskets and whatnot.  There's also plenty of Scottish history and vocabulary thrown in.  Stevenson incorporates a lot of actual Scottish history and names of real people, but since everything I know about Scottish history comes from watching Braveheart and reading the Outlander series by Diana Gabaldon (which lost me after about the third or fourth volume), I was kind of lost during parts of it.

Still, I mostly enjoyed this book.  My favorite parts were the interaction between David and his new best friend Alan, who's a character of questionable morals but evidently with a heart of gold.  Parts of this story were reminiscent of one of those road-trip stories with two strangers thrown together. 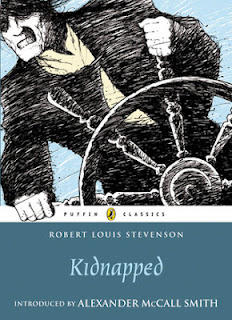 Other than my lack of understanding of Scottish history, my main quibble with the book the ending, which was incredibly abrupt.  I realize this story was serialized, but it just seemed to stop.  I suppose Stevenson wanted readers to keep reading the sequel, Catriona, which I'd never even heard of (it's known as David Balfour here in the U.S.).

So.  I can see why it isn't as popular as the iconic Treasure Island, but still, an entertaining (if somewhat frustrating) story, but a nice swashbucker and a fun, quick Victorian read.
Posted by Karen K. at 4:54 PM