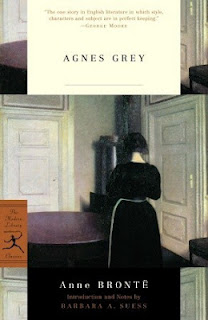 Another short Victorian, and hopefully a short review to accompany.  I bought this one several years ago in my quest to read everything by the Brontes, which was delayed after my extreme hatred of Wuthering Heights (I know, it's unfair to compare all three sisters as one entity, but I can't help it.  If it weren't for my love of Jane Eyre, I would have given up on the Brontes all together after reading WH).  This book languished on the shelves, though I did make a halfhearted attempt a couple of years ago when it was selected for my real-life Classics group.  I didn't finish it and the reaction among the group was just meh.  I decided to give it another go for the Victorian Celebration.

So, the setup:  young Agnes is growing up happy, though in somewhat difficult financial circumstances, with her sister, and parents.  Her father is a poor clergyman and her mother was from a wealthy family but abandoned them after she married downward for love.  Money is tight but they're happy, but an unwise investment with the family's savings turns out badly.  Agnes doesn't feel like she's contributing to the household so volunteers to take a position as a governess, basically the only job available to poor women of her social standing.

And what a crappy job it is!  Agnes is the governess of a rich but wretched family.  She has all the responsibility of educating the children, but no power to enforce any discipline.  The children are incredibly spoiled so she never makes any progress, and one of the kids is definitely a psychopath -- his parents think it's okay for him to torture little animals and are angry when Agnes tries to put a stop to it. Needless to say, this job doesn't work out and the reader is relieved when Agnes returns home to the rectory.

Her second job is only slightly better, the children are shallow and empty-headed and again, no discipline, yet the parents expect miracles.  The kids are older, only a little younger than Agnes herself. The oldest daughter is looking for a husband and is pretty heartless, toying with the affections of all the local men, though she pretends to treat Agnes as a friend.  Agnes is hopelessly lonely -- she'll never be on the same level as her employers; she's not the same social status of the servants, who don't trust her, so basically, she has no one to talk to, and she has almost no free time to make friends in the village anyway.

Basically, Agnes Grey is an autobiographical expose on the horrible life of the governess.  It's very short, but I ended up stopping halfway through and for more than a week I had no desire whatsoever to finish it, it was just so negative.  However, after I basically forced myself to pick it up again, I was able get through it pretty quickly.  The second half got better and there was an interesting plot development which actually made me wish the book had been longer.  It definitely felt like a first novel, or even a first draft -- I feel like if the story had been fleshed out more, it might have been as good as The Tenant of Wildfell Hall or even Jane Eyre.  It's just too bad Anne Bronte died after writing only the two books.  I really would like to have seen what she'd come up with next.

So now I've read five of the seven complete novels by the Brontes, only Shirley and The Professor before I've completed them all.  Are they worth reading?
Posted by Karen K. at 10:07 AM