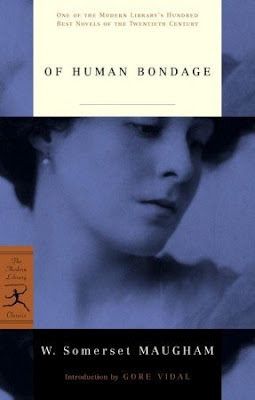 "Insensibly he formed the most delightful habit in the world, the habit of reading: he did not know that thus he was he was providing himself with a refuge from all the distress of life; he did not know either that he was creating for himself an unreal world which would make the real world of every day a source of bitter disappointment."

Of Human Bondage is one of the very first classics I ever read for pleasure, and I still love it.  I first read it when I was eighteen, a freshman in college.  It was forced upon me by a boy in my dorm, who lived down the hall and on whom I had an enormous crush.  He insisted I take it home over Christmas break and read it.  How could I refuse?  Well, I did end up loving the book, though things never worked out between the two of us.

Years later, I've read lots more classics for pleasure, including several by Maugham, but I never picked it up again -- I had so many other books I wanted to read!  It's actually been so long since I read it that I could barely remember the story any more.  I didn't even remember how it ended!   Finally, I decided it was time for a reread.  Last fall we nominated books for 2012 our classics group at the library, and I put this on my list -- I wanted so much to discuss it with other people!  Well, wouldn't you know it, things came up and I had to miss the discussion, but I couldn't resist reading the book again anyway (I also added it to my Classics Club and Chunkster Challenge lists).  And I am pleased to report that I still loved this book the second time around, maybe even more so than the first time.

For those who aren't familiar with the book, it's a bildungsroman, a coming-of-age story, loosely based on the life of the author W. Somerset Maugham.  (It's a long book, so I'll try to give the setup without too many spoilers). The main character is Philip Carey, a young man growing up with a clubfoot in the late Victorian period.  He's orphaned as a small boy and sent to live with his uncle, a strict vicar in a small town in Kent.  His aunt is kind but doesn't know much about raising children.  Philip is a bright boy but mostly bullied by his schoolmates because of his disability, and his teachers seem pretty heartless.

However, Philip is a bright boy, and when he's older, he goes off to boarding school, and his teachers expect great things of him.  His uncle expects him to go off to Oxford and then take orders, but Philip has doubts about religion.  Instead, he goes to Germany for a year to study before returning to England.  Philip has a small inheritance, and tries various professions. He spends two years as an art student in Paris before he realizes he'll never be anything but a mediocre artist, so he finally decides to follow in his late father's footsteps and become a doctor.

One fateful night in a cafe, Philip meets a waitress named Mildred, and it's the beginning of an obsessive relationship.  Mildred is really toxic, one of the most obnoxious characters I've ever met in literature.  The book deals with their relationship and Philip's personal growth along the way.   Will Philip marry this horrible woman?  Will she put him in the poorhouse with her greed?   "He did not care if she was heartless, vicious and vulgar, stupid and grasping, he loved her.  He would rather have misery with one than happiness with the other."

This book is more than 600 pages, but I breezed through it in about five days.  I couldn't wait to find out what was going to happen, though I did have to grit my teeth and power through a few times -- Mildred is so awful, I really wanted to reach into the book and throttle her!  And Philip deserved a few good smacks upside the head a couple of times too.  But I really did love this book.  Philip's personal journey is really interesting and I got really caught up with it emotionally, I was really on the edge of my seat.  And I found the writing to be just wonderful and insightful.  Apparently Maugham considered himself among the best of the second-rate writers, but I disagree.  I kept finding passages throughout the book that I loved, and kept marking them with sticky notes (since I hate writing in my books).

I also loved reading about Philip's year in Germany, and his attempts to be an artist.  A couple of times Philip mentions a stockbroker fellow who chucked it all to be an artist in the South Seas, which is obviously Paul Gauguin -- who shows up in his 1919 novel, The Moon and Sixpence -- another Maugham novel which I read years ago and have essentially forgotten.  I'll have to reread that one again as well.

Has anyone else read this book?  Did you love it as much as me?  Any more Maugham you can recommend?  And have any of you reread a favorite classic after a long period?  Did you still love it or was it just not the same?
Posted by Karen K. at 11:40 AM