Cutting for Stone by Abraham Verghese 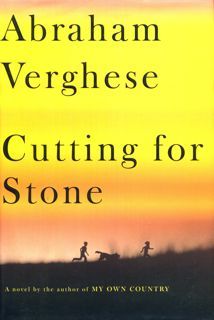 So, I finally finished the SECOND of the two big fat books I was reading simultaneously (note to self: this is a bad idea).  Cutting for Stone is one of those books that's been floating around the book discussion group circuit and seems to be mostly beloved.  I never made time to read it, but I had a copy that I bought for a mere $1 at the library sale a couple of years ago, so I used my powers as book club coordinator to put it on the reading list.

I knew nothing about this book, other than it was more than 500 pages long and had something to do with a doctor and Ethiopia.  I knew nothing about Ethiopia either, other than once having eaten at an Ethiopian restaurant in Chicago called Mama Desta's Red Sea, where the food was extremely spicy, and there was no silverware -- you eat with little pieces of bread called injera.  (That's in the book too -- the bread, not the restaurant)


But I digress.  This is a big book, full of stuff.  Without spoilers, here's the setup:  In 1954, at an Ethiopian hospital, a beautiful Indian nun (who is also a nurse) Sister Mary Joseph Praise, goes into premature labor, shocking the entire staff with the fact that she's pregnant.  She gives birth to twins, Marion and Shiva, who both grow up to be doctors.  The story is told from the point of view of the elder twin, Marion, who tells the story of his birth and conception, and his coming of age.  The story covers Ethiopian history, political uprisings, loves, and loss.

After reading it off and on for a couple of weeks (alternating with other books) I finally finished it.  After thinking about it for a while, I realized the best way to describe this book is messy.  It's a big, sprawling novel, and it covers more than 30 years of Marion's life, not including the back story of his parents and other characters.  It's kind of all over the place, jumping around and breaking up the narrative.  It takes 200 pages for these kids to be born, because the author kept digressing into the various character's histories, including the history of someone who doesn't even get a proper name until the end of the book.  I found this really erratic and frankly, quite annoying at times.

I'd also describe this book as messy because there is an awful lot of medical stuff, and to be frank, it's not for the squeamish.  There are a lot of bodily fluids and functions described, and unless you have a strong stomach, you might not to read parts of it while eating (I spend almost every lunch hour reading when I'm at work).  The author of the book, Abraham Verghese, is both a doctor and a writer.  This is his first novel, but he's been a doctor for years, and is currently a professor at the Stanford University School of Medicine, so he obviously knows his stuff.  I did find the medical stuff very interesting, but it's not for everyone.

I also really enjoyed learning about Ethiopia and about Marion's life as a medical student, but overall, I thought the novel was just too much -- there's a LOT of melodrama and unbelievable coincidences, several of which I just couldn't get over.  It was an interesting read, but I really felt like it could have used some editing.  I also found a lot of the characters to be quite undeveloped -- he'd spend pages and pages on a character, then they'd be relegated to the background.  Plus I think he spent more time creating a character's history, not so much the actual characters themselves.  Does that make sense?  It's like he spent more time describing them, instead of showing us more through their dialogue and actions.

I also realized after reading it that both Cutting for Stone and my previous read, Of Human Bondage, were coming-of-age stories about orphaned boys who become doctors.  (And both were long).  But that's where the comparison ended.  Compared to Of Human Bondage, this book was really lacking in character development, and the writing wasn't nearly as good.  Overall, Cutting for Stone was an interesting book, but I wouldn't say I'm raving about it.  I'm glad I read it and I'm sure we'll have a good discussion, but I can't say it will be considered a classic someday.
Posted by Karen K. at 5:01 PM