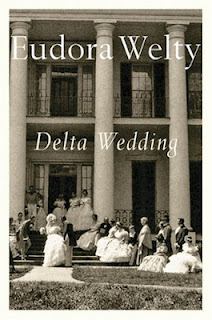 I finished this last night, just in time for the discussion today at my classics book group.  I liked it, yet I am having a hard time describing this book.  It's sort of a book about nothing, if that makes any sense.

Essentially, it is a book about a quirky extended family in the Deep South in the 1920s, as spend a week together for a wedding.  Well, that's not true.  Other than the family getting ready for this wedding, there is not much plot to speak of.  The wedding serves as a plot device to get the entire family together, and showcase their various quirks and foibles.  There isn't a whole lot of character development.  It begins with the arrival of young Laura, the nine-year-old cousin of the Fairchilds, an old Southern family living in the Mississippi Delta (which is technically not a Delta, but that's really a geography lesson, and this is not school).  Laura's mother was a Fairchild, but she died in the past year, and Laura can't stand up in the wedding and be a flower girl, to her disappointment.

You'd think that the story would some how revolve around Laura, or at least would unfold from her point of view, but it does not.  The focus of the story, and point of view, change from character to character throughout the novel, and I'm not even sure what the story is supposed to be about, other than giving the reader a real sense of what large Southern upper-class families were like in this time period.  There are maiden aunts, and baby cousins, and hot-tempered sisters-in-law; there is a cousin who was dropped on her head as a child; a seventeen-year-old bride who's marrying the plantation overseer twice her age; and the mother of the bride is currently pregnant for the tenth time.  See what I mean?  A whole cast of quirky characters.  A lot of characters -- in fact, I actually started writing a family tree at one point, to try and keep them all straight and figure out who belonged to who.  I've only done that once or twice in all my years of reading.  If ever there was a book that needed a family tree in the appendix, this is it.

All these characters gave quirky names as well -- Battle and Rebel and India and Bluet and women with men's names and people who have the same name, like little Battle and Little Uncle.  And there's a character named Lady Clare, but she's a child and not an aristocrat to my knowledge.  And then there's all the servant's names, but that's another whole list.

I liked this book a lot, but I'm not sure I can explain it to anyone.  The writing was really good, but sometimes the metaphors just confused me.  I'm not sure if Welty was just kind of rambling, or if it was supposed to be stream-of-consciousness, but it did remind me a bit of Faulkner.  After awhile I tried to stop making sense of some of the writing and just went with the flow of it.  Parts of it were a little like poetry, if that makes any sense.  I think the characters were trying to explain their feelings, and sometimes you can't express them exactly in words.

And now I'm the one who's rambling.  Anyway, the book group was today.  Some people liked it and others thought it was sort of a waste of time.  If you're looking for something plot driven, this is not the book for you.  If you like great atmosphere, descriptions, and charming quirky characters, you might enjoy this book.