In honor of the second annual DWJ March, I've written a guest post for Kristen at We Be Reading.  She's posed the question:  What makes Diana Wynne Jones magical? 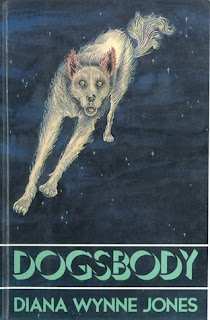 Well, I don't know about everyone else, but the first thing I thought of was how Diana Wynne Jones is one of the brilliant children's authors whose works really stand the test of time.  To me, she's just as good as J.K. Rowling.  I read my first DWJ book, Dogsbody, years ago when I was in middle school.  I probably picked it up because there was a dog on the cover, and even though I didn't get some of the British slang and references until years later, the story completely transported me.  If you haven't read it, it's one of her first works, and a fantastic book.

Anyway, in Dogsbody, Sirius, the Dog Star, is not just a star, he's a sort of a celestial body personified.  The story begins with Sirius on trial for murder by his peers, and he's sentenced to live a dog's life -- literally -- on Earth, unless he can find a mysterious object called the Zoi.  Otherwise, he'll spend the rest of his natural life as a dog, and die here.

Sirius is reborn as a puppy, and is rescued from drowning and found by a lonely girl, Kathleen.  Kathleen is Irish and is living an almost Cinderella-like existence with some horrible cousins in England, while her father is serving a prison sentence for his involvement with the IRA.  Sirius is renamed Leo and is Kathleen's salvation, and as he grows, he becomes protective and attached to her as he searches for the Zoi.  He becomes torn between his love for Kathleen and his desire to find the Zoi and return to his life as a celestial being.

DWJ is just brilliant at bringing characters to life.  Kathleen is a sad orphan, but not sickly sweet, and the relatives who've taken her in are pretty horrible, rather like the Dursleys in the Harry Potter series.  (Imagine, however, if the main character in Harry Potter never leaves Privet Drive, but is stuck there with a magic dog instead of escaping to the wizarding world of Hogwarts.)

It's a great story and I read it over and over as a child.  I never could find any more books by Diana Wynne Jones -- back then we didn't have inter-library loan, and the bookstores in my town were pretty lame.  I essentially forgot all about Diana Wynne Jones until 2005, when I spotted a copy of Howl's Moving Castle at a bookstore in a Japanese train station when we were stationed there -- I think it was in Kyoto.  Every Japanese train station has a bookstore, but the supply of English-language books is pretty limited.  I'm sure it was only available because the movie version had just been released, though I never got to see it on the big screen.

Anyway, since then I've read lots more Diana Wynne Jones books, and I've reread Dogsbody several times --it's just as good thirty years later!  I'm pleased to see there's a new paperback edition with a brilliant introduction by Neil Gaiman.  It's worth buying just for Gaiman's intro, which is very touching and got me all choked up.

I'm still trying to finish the complete works of Diana Wynne Jones, but one of the nicest things is that I share her books with my own children.  My youngest is almost twelve and loves Howl, which just thrills me to bits.  To me, any author that you can pass down to a new generation is the definition of magical.

This is cross-posted on Kristin's blog, We Be Reading.
Posted by Karen K. at 3:01 PM