The Mystery of Mrs. Blencarrow by Margaret Oliphant 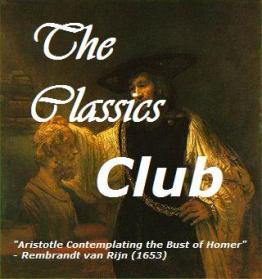 Well, we got the results of our Classics Spin two weeks ago, and my selection is  #14, The Mystery of Mrs. Blencarrow by Margaret Oliphant!  Yes, the only Persephone on the list, and the third one I've read in two months.

This was a little different than most Persephones, because first of all, it's a Victorian, written in 1890, and secondly, because it's actually two novellas published together, each about 100 pages.  (Persephone also published The Making of a Marchioness together with its sequel, but these two books stand alone, though they have related themes.)

First, a bit about Mrs. Blencarrow.  Frankly, I can't say too much, because I'd basically give away the entire mystery -- though once the plot is set in motion, the answer is pretty obvious.  Bascially, this is the story of a wealthy youngish widow, Mrs. Blencarrow, who lives on an estate with her children.  She's got several children, and the oldest is nearly of age, so she can't be older than her late thirties.  Mrs. B. is very self-possessed and well-respected, but in the first chapter, someone mentions that there is "something curious in Mrs. Blencarrow's eyes. . . . She looks you too full in the face with them, as if she were defying you to find out anything wrong about her."  Well, heaven forbid -- she must be up to something!

What's interesting is how everyone reacts to their suspicions.  Nasty rumors fly about, her brothers come rushing in to confront her -- it's very Victorian and overly dramatic to the 21st century reader.  Mrs. Oliphant was obviously trying to make a point, and ultimately, it's poignant and sad.


The second novella in the volume is Queen Eleanor and Fair Rosamond.  Published in 1886, this is also a story about a strong female character, a married woman named Mrs. Lycett-Landon, the wife of a wealthy Liverpool businessman, again with a houseful of children.  Mr. Lycett-Landon is forever traveling back and forth between London and Liverpool, and though the family appears quite happy from the outside, they're always a little happier when Mr. LL is away on business.  Gradually he spends less and less time in Liverpool and hints are dropped, and his wife decides to do a little digging, with some shocking (to her) results.

Again, not so much a mystery to modern readers -- I could guess the plot twist almost immediately -- but maybe it was for Victorian readers.  I preferred the second story.  I also appreciated that the publishers included an afterward instead of a forward -- I hate it when publishes spoil the plot, I rarely read introductions until after I've finished the story.

Anyway, the afterward includes some background and insights into the novellas and the author.  Mrs. Oliphant was a Scottish widow, a woman with very little education who became a prolific writer during the Victorian era.  She began publishing novels when she was 21, and her finished works totaled more than 100, which is astonishing for a woman writer in that era.  At the time, she was as well known as Dickens, Trollope, and Eliot, though few of her works are still in print.  Besides this one, I think the only other one currently in print is Miss Marjoribanks, which is still on my to-read shelf.  It's quite long but now I'm inspired to read it and will hopefully get to it by the end of the year.

This also counts as my 19th Century Classic for the Back to the Classics Challenge 2013.
Posted by Karen K. at 12:14 AM