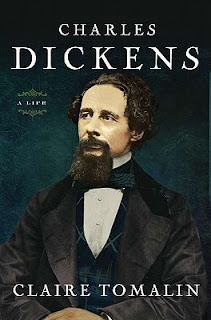 Last year was the bicentenary of Dickens' birth, and there were a slew of books published about Dickens -- I can't remember how many I added to my to-read list, but still haven't read (I did celebrate Dickens by completing three of his works in 2012:  Martin Chuzzlewit, Our Mutual Friend, and Barnaby Rudge.)

I bought this book just after Christmas, but kept avoiding it.  Big fat nonfiction books tend to scare me, which is a little stupid.  Some of my favorite reads last year were nonfiction, and one of my favorites was a biography, Becoming Queen Victoria by Kate Williams.  However, I realized it was available in audiobook format, and last year I submitted it to the "Suggest A Purchase" feature on the library's website.  They did buy it, and after months of waiting, it finally arrived in January.

I really, really enjoyed this book -- I used to think biographies were dry and boring, but either I was reading the wrong books, or they've gotten much better lately.  This was fascinating stuff.  I knew the basics about Dickens' life from bits and pieces I'd picked up after reading his books, but to learn about his life from start to finish was quite fascinating.  Of course, many readers know now that he was forced to work in a blacking factory as a child after his father was sent to debtor's prison, the inspiration for his favorite novel, David Copperfield.

I loved learning about Dickens, and having read most of the novels, it was interesting to place them into the context of his life.   Though I've enjoyed most of his books, and absolutely love some of them, I learned some things about him that I didn't like very much.  He was a complicated person.  His childhood was difficult, his father was terrible with money, and even though Dickens seemed to work tirelessly, he was constantly faced with demands for financial support from his father, his brothers, and his own children, most of whom were not terribly successful.

Dickens definitely had faults -- his now-famous liaison with a much-younger actress Nelly Ternan is pretty scandalous, and it seems like he was pretty cruel to his wife, and sometimes his children.  But Tomalin obviously did amazing research and puts it all together in a way that's easy to follow.  Just reading his handwriting alone is a triumph -- I've seen some Dickens' original letters and manuscripts in exhibits, and he's nearly indecipherable.

I think listening to something challenging makes it a little bit easier.  For me, it's a little less intimidating if I start with an audio of a book that scares me.  I can take it in bits and pieces, and then I'm not as scared to tackle the print copy.  In this case, I listened to it a little bit every day while driving to and from work in the car, and I really enjoyed it.  I always try to have an audiobook in the car because the radio here in my city is just dreadful.  (I like NPR but I can't listen to the news too much because I find it too depressing).   Also, I usually have a print copy so I can read the book at home (and sometimes a second library copy at work) -- otherwise I'd sit in the driveway listening!   However, then I find it takes me forever to find my place in the audio when I get back in the car.  This time I resisted because I was really enjoying the audio version.  I listened to almost the entire book, except when I got to the end of the three-week checkout period and I couldn't renew it because there were holds on it.

Anyway, I was sorry when it ended and now I want to read lots more biographies, more books about Dickens, and most importantly, I'm determined to finish the rest of Dickens' novels.  I have three left:
The Pickwick Papers, The Old Curiosity Shop, and The Mystery of Edwin Drood.  Which one should I read next?  Which other books about Dickens are must-reads?  And how do you feel about audiobooks?
Posted by Karen K. at 12:26 PM