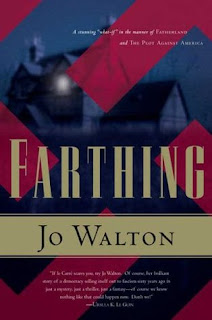 It seems like my book choices, consciously or unconsciously, seem to follow themes. I'll read several adventures stories back to back, or biographies, and so on. Recently, I read three or four novels with WWII connections in a row -- Rowan Farm, The End of the Affair, and Farthing by Jo Walton (and I'm currently listening to an audiobook of When Books Went to War by Molly Guptill Manning.

Farthing was a book that had been on my radar for a long time, and now I can't even remember why I finally got around to checking it out from the library. It languished on the library TBR pile for weeks until I threw it in my book bag on a whim -- I'm notoriously bad about checking books out over and over and not reading them, so I started flipping through this last week on my lunch break. I was completely hooked and read the whole thing in two days -- I would have read it faster except I had to actually go to work  - so annoying how work cuts into my reading time!

Anyway. Set in the late 1940s, this starts out as a standard mid-century English house party murder mystery (a tiny bit like Gosford Park), though it's told in two viewpoints, alternating by chapter. The first chapter is told in the first person by Lucy, the grown daughter of the owners of the eponymous Farthing estate; and in the third person by Inspector Peter Carmichael of Scotland Yard. The great twist of this novel, however, is that it's told as an alternate history, as if peace between England and the Nazis had been brokered in 1941, and the Nazis had won WWII on the Continent. (Apparently, the Americans never really got involved, and the Nazis are still fighting the Communists over Russia).

The novel starts out at a weekend house party, which Lucy is attending with her husband David, and the behest of her parents. Their estate, Farthing, is the center of the "Farthing Set" that helped broker the peace accords with Hitler, and the murder victim is Sir James Thirkie, the influential young MP who was instrumental in the talks. Things get ugly when it's implied that there is an anarchist/Jewish connection.  Lucy's husband David Kahn, a Jew, is a suspect in the murder, despite the sympathies of Detective Carmichael.

I read this book thinking it was a standard murder mystery, but it quickly became apparent that it's much more than that. Really, it's a chilling account of what could have happened -- and what could still happen -- when Fascists come to power. Jews are still wearing yellow stars on the Continent and anti-Semitism is rampant in England, especially among the upper classes, which apparently was quite common during WWII. (Diana Mitford's husband Oswald Moseley, a notorious Fascist, is mentioned, and Edward VIII was rumored to be a Nazi sympathizer as well). This being the mid-century, homosexuality is still illegal and there are also some closeted gay characters in peril. The whole thing is quite terrifying and I found myself on the edge of my seat towards the end -- I kept having to take breaks and put it down because I was very nervous about how everything would end up.

This book is categorized as Science Fiction in my library, I suppose since it's an alternate history, but I really think it would be better off cataloged as a mystery or just literary fiction. It has less than 3,000 ratings on Goodreads and I think it's tragically overlooked -- it was just a great story and I'm dying to know what happens to the characters. Farthing is the first book in Walton's Small Change trilogy, and I'm anxiously awaiting the sequel, Ha'penny, to see what happens next. I know Inspector Carmichael is in the second book but I'm not exactly sure what happened to Lucy and David. Farthing just a great read and I highly recommend it.
Posted by Karen K. at 5:25 PM