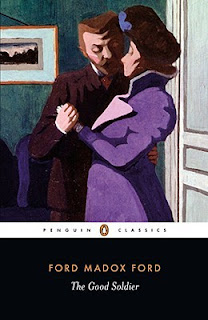 I took this one off the shelf at the library the other day because it was my lunch break and -- gasp! -- I'd left my book at home. The horror! But The Good Soldier by Ford Madox Ford was a) on my Classics Club list and b) short, under 200 pages, so it seemed like a win-win. It's a very short book, and yet I could talk about it for hours.

Essentially, this is the story of two Edwardian-era couples with extremely dysfunctional marriages.  Edward and Leonora Ashburnham, a British couple, meet an American couple, John and Florence Dodwell, at a German resort, and begin a friendship that lasts for years. The narrator, the hapless John, has no idea that his wife Florence has been carrying on an affair with Edward for years, until both Edward and Florence are both dead. In a rambling narrative, the reader gets the story of the couples' friendship and the subsequent affair, just as though one was sitting down having a series of drinks with John and he was recounting the tragic story in person (possibly on a veranda in the tropics, with an ocean view and some nice cocktails, or seated in deep leather chairs in a gentleman's club.)

What seems a straightforward, though tragic story is eventually revealed to include a lot of twists and turns, with lies and hypocrisy and characters you just want to shake or smack upside the head. The ending left me flabbergasted and full of questions, and I so wish that I had chosen this book to discuss back when I belonged to a face-to-face classic book discussion group a few years ago.

This book was published 100 years ago, in 1915, and I imagine it was groundbreaking for its time, mostly because of the style of writing -- I wouldn't call it stream-of-consciousness, but it doesn't really follow a linear progression. It digresses and rambles, but it's still really insightful and beautifully written. The Ashburnhams are trapped in a loveless marriage, yet they are loathe to admit it or even consider divorce. The Dodwells are from old moneyed families from the northeastern U.S., but I imagine that's fairly similar in regards to the upright, "stiff upper lip" sort of attitude of most of these characters.

As I was reading it, I immediately recalled another book that really stuck with me, Graham Greene's The End of the Affair, which I finished just a few weeks ago. I can definitely see how Ford must have influenced Greene -- the two books are almost companion pieces, with Greene's being the flip side, the adulterer instead of the cuckolded husband. The marriages of these characters are both tragic and heartbreaking, but at the same time, I felt like the characters mostly deserved what they got, in the end -- yet another case of fascinating train wrecks.
Posted by Karen K. at 10:56 AM