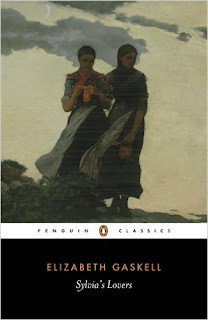 Once again, the Classics Spin picked a winner! I'd had this book on the TBR pile for several years, ever since I read Gaskell's Wives and Daughters, one of my all-time favorite books. I read Gaskell's first novel, Mary Barton, a few months ago, but in my opinion Sylvia's Lovers is the superior book.

Set in the late 1700s, this is the story of Sylvia, a young woman living in Yorkshire, and the two men who love her. The story begins with an incident of press-gangs, who were basically kidnapping men and forcing them against their will to become sailors for the British Navy, serving in the war against the French. A whaling ship, just returning after months at sea, is intercepted by a press-gang, and instead of returning to the welcoming arms of their loved ones, are immediately pressed into service and forced to return to sea to fight.

The press-gangs were feared and hated in the late 18th century, and are key plot points in the story. Young Sylvia Robson is 17 and the prettiest girl in town. Her cousin Philip Hepburn, a draper, has always been in love with her, but she finds him dull and pedantic. Her head is turned by a daring sailor, Charlie Kinraid, who is wounded in a skirmish against a press-gang. Charlie has a reputation as a heartbreaker, and Philip is jealous. A tragedy occurs, and Philip withholds information which could either hurt Sylvia, or give her hope.

Meanwhile, a young woman who works with Philip is in love with him, and another draper's clerk is in love with her. Basically, it seems like nobody will be happy in this story. Philip struggles with moral dilemmas, and the threat of war and the press gangs loom, and tragedy ensues.

Overall, I liked this book much better than I expected. I'd been put off reading it for years, mostly because I didn't think it would measure up to Wives and Daughters or North and South, two of Gaskell's best-loved works. Also, I found Mary Barton to be kind of preachy. It's a Gaskell's only historical novel, but I've been more interested in the Victorian period than the Napoleonic era. However, a couple of months ago I started reading the Poldark series, and though that's set in Cornawall, the opposite end of England, it's nearly the same time period, and that gave me a little courage.

I was also dreading it a little because I'd heard much of it is written in dialect, which it is, and that was somewhat hard to get through. However, I found the story pretty compelling; in particular, I thought Philip was a really well-rounded character, and I thought Gaskell did a good job with his moral dilemma. I did find Sylvia to be a fairly flat character, however. Honestly, she didn't have much personality -- other than being the prettiest girl in town, there's not much to her. She's a basic stock ingenue, like Charles Dickens' creations, which disappointed me. Also, the ending does sort of wallow in melodrama.

Overall, a good read, though not quite up to the standard of Gaskell's very best work. It was a pleasant surprise and now I'm nearly finished my Classics Club list, only 13 books to go! I'm looking forward to the next Classics Club spin!

I'm also counting this for the Reading England Challenge (Yorkshire).
Posted by Karen K. at 8:00 AM