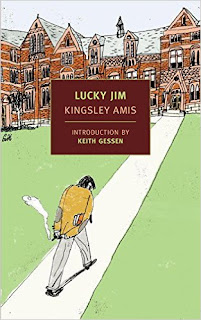 I'm down to the last few books on my Classics Club reading list, and I was pleased when the most recent Classics Spin chose my latest read: Lucky Jim by Kingsley Amis, a satirical look at life for a hapless college lecturer who can't help getting his professional and personal life intertwined, with disastrous results.

Set in the early 1950s, the protagonist, Jim Dixon, is a lecturer of Medieval Studies at a nameless British university. He's desperately trying to hang on to his job, and a weekend at a his supervising professor's house throws him in company with the his boss's son Bertrand, a pretentious artist; and Bertrand's latest conquest, a charming bookseller named Christine. Dixon falls hard for Christine but a series of embarrassing mishaps pull Dixon deeper and deeper into a spiral he can't escape.

I'd heard this one was one of the funniest books of all time, but it actually took me three tries to finally make it past the first chapter of this book. I think I had a hard time with this book the first two tries because Dixon himself is not a very likable characters -- he seems to be someone who's always just getting by without putting any effort it, something of a slacker. He's only teaching Medieval studies because no one else wanted it.

Amis does really have a knack for making every situation seem real, no matter how contrived and bizarre, starting with a hilarious incident in which Dixon is trying to cover up damages he's done to his guest room on the initial weekend. Things eventually go from bad to worse Dixon becomes embroiled in a series of love triangles which are unfortunately entwined with his professional life.

I really disliked Dixon's character at first and thought it was just a book about disaffected and annoying academic types, but about halfway through the book, I really started to root for Dixon. I don't want to give anything away, but something changes his life and makes him start to be a better person. There's an extended scene in the middle which turns the whole story into something great.

I ended up loving Lucky Jim. In a way, it's kind of the flip side of the academia one finds in Barbara Pym, and a very little bit like Wodehouse, though Dixon is much snarkier and has a mean streak you won't find in Jeeves and Wooster. It's a different sort of British comedy than I'm used to reading and I'm very glad I gave it another try.

I'm also counting this as my 20th Century Classic for the Back to the Classics Challenge.
Posted by Karen K. at 9:08 AM