The Phoenix and the Carpet by E. Nesbit 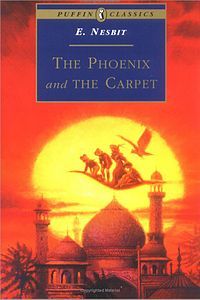 After finishing Journey to the Centre of the Earth, I was still in the mood for a some good adventures. I remembered a copy of The Phoenix and the Carpet by E. Nesbit that I'd picked up years ago at a library sale. How is it that I completely missed out on Nesbit in my youth? I suppose my hometown library just didn't have them. Well, I've now completed five of her books and loved all of them. This one ranks right up at the top of great classic children's fantasy, right up there with the Wizard of Oz books and the entire oeuvre of Roald Dahl.

Published in 1904, The Phoenix and the Carpet is the second in the series of that began with Five Children and It. Instead of a magical sand fairy, the a family five children find both a magic carpet and a magical bird, a legendary phoenix. By a series of mishaps (well, basically, they decide to try out fireworks inside the house) they have to get a new carpet for the nursery. Their parents buy a second-hand carpet which, when unrolled, is found to include a strangely glowing egg. The children attempt to return it, but no go. After the egg accidentally rolls into the fireplace, it hatches and out comes the phoenix, who explains that the carpet is also magic, and can give them three wishes a day.

If you're looking for serious high fantasy, this isn't it. Although the children are occasionally transported to faraway places, their adventures are pretty tame, though humorous. As in Five Children and It, the children quickly realize that wishes don't always work out quite like you plan. Of course it's a children's story, so most everything comes out right in the end, but Nesbit's chapters are cleverly plotted, so I really wasn't sure how everything was going to shake out. And the writing is both wry and witty, with a few sharp observations. It's both entertaining and funny as the kids get in and out of scrapes. My only quibble as that in some their adventures, they encounter "savages" who are quite obviously people of color, and the racism that tinges these episodes.

Overall, though, it was quite a delightful read, and tI'll probably include it among my favorite books of this year. I'm counting it as my Fantasy/Sci-Fi/Dystopian Classic for the Back to the Classics Challenge.