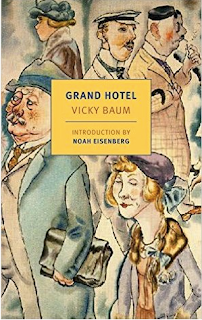 On my recent visit to London, I was fortunate enough to visit a whole slew of bookstores. I saw this brand-new edition of an NYRB Classic: Grand Hotel by Vicki Baum. It ticked off a lot of boxes for me:


So, basically, this was a no-brainer -- I had to buy it. It took a couple of chapters to get into it, but once I got started it was great. Set in 1929, it's the story of a different guests at the posh Grand Hotel in Berlin: the aging ballerina Grusinskaya, who is worried that she's losing her appeal; the sexy playboy Baron von Gaigern; the tragic Dr. Otterschlag, whose face was destroyed by a bomb during the Great War; Herrr Preysing, the director of a family firm who's desperate to secure a manufacturing bid; and the meek clerk Kringelein, who's worked for thanklessly for years for Preysing's firm. He recently had a terminal medical diagnosis and has decided to spend his last few weeks enjoying life. Some of the characters have a slight connection, like Preysing and Kringelein, but after a few days in the same hotel, their lives interconnect and are changed forever.

I really enjoyed this book. I love how Baum intersected all the characters' lives, and I thought the plot was great and the ending well done; however, I think the strength of this book was the character development. I do love any book that has a variety of characters -- I'm particularly fond of books set on trains and sea voyage (I think it started with my love for Murder on the Orient Express.) In this book I was concerned at how many characters Baum, was going to introduce, but it was easy to keep them all straight. I do wish there had been a better ratio of female to male characters (there's also a beautiful young stenographer who shows up about halfway through the book) but Baum made a point with both of the women about the limited choices they had during the time period.

I also found the writing to be very insightful. The whole book is full of great quotes that I kept marking with little scraps of paper as I read. Here's one of my favorites:

Then the doors closed throughout the hotel. Everyone locked himself in behind double doors and each was left alone with himself and his secrets.

And here's Dr. Otterschlag using hotel as a metaphor for life:

The whole hotel is only a rotten pub. It is exactly the same with the whole of life. . . . You arrive, stay for awhile, and go on again. Passing through. Isn't that it? . . . and what do you do in life? A hundred doors along one corridor and nobody knows a thing about his next-door neighbors.

Originally published in German as Menschen im Hotel, this was an international best-seller and was adapted as a stage play and an Oscar winning movie in 1932, starring Greta Garbo, John Barrymore, and Joan Crawford -- it's the source of the famous Garbo line "I want to be alone." I've never seen it but it's available on Netflix so it's at the top of my DVD queue.

Vicki Baum wrote about 50 books altogether, some in German, some in English after she left Europe during WWII. As an Austrian Jew, her books were banned by the Nazis, so I'm counting this as my Banned or Censored Classic Book for the Back to the Classics Challenge.
Posted by Karen K. at 3:17 PM

Labels: 2016, Back to the Classics, banned, between the wars, Germany