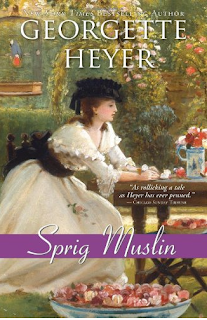 After my previous read for the Back to the Classics Challenge (a nonfiction memoir about life in a Russian gulag), I was in dire need of something fun to read. When the going gets tough, the tough need comfort reads! I'm not a big romance reader, but I've read a few of Georgette Heyer's Regency romances, and her books are fun, frothy light reads.

Published in 1956, Sprig Muslin is a charmingly silly screwball comedy set in the Regency era. After his fiancee died in a tragic accident years before, Sir Gareth Ludlow put off marrying until his older brother dies, leaving him the heir apparent. On his way to make an offer of marriage to the quiet and steady Lady Hester Theale, he stops at an inn and encounters a young girl, Amanda, whom he soon realizes is running away from her family so she can elope with her young swain, an Army officer. Sir Gareth knows that she's out of her depth and needs protecting, but with completely noble intentions. He takes her along to Lady Theale's estate, where naturally her family assume young Amanda is his paramour. Naturally there are lots of mistaken intentions, escape attempts, and snarky comments about the fashionable Regency set. Of course all comes right in the end.

Heyer's books are frequently recommended to fans of Jane Austen, and though the settings are in the same era, the similarities end there. Heyer is no Jane Austen, and after six or seven of her novels, I'm starting to see basic characters and situations repeating themselves -- the charmingly impetuous ingenue who is running away (often from an arranged marriage); a loyal young man who befriends the ingenue to get her out of a jam; a handsome, eligible bachelor (with a title, naturally) who saves the day; and a patient, quiet woman who ends up marrying the hero.

Bits of it became a little tedious -- Amanda is really headstrong and spoiled, and she can't stop making up stories to convince people to help her -- and she gets away with everything because she's so pretty, which is truly annoying. That's not to say I didn't enjoy this book. I don't know if it's the best book I've ever read by Heyer (so far I think The Grand Sophy and Sylvester are my favorites so far) but it was very enjoyable.

I don't usually read romances but sometimes one needs a break from reality -- and I'd much rather read one of Heyer's comedies than yet another Jane Austen knockoff. Heyer wrote more than 40 historical novels, many of them set in the Regency era, and a dozen detective novels. They are usually funny and Heyer did extensive research into Regency history and society, so her descriptions and references to Regency life are very accurate.   I also own a recent biography of Heyer that I found at the Half-Price Books last year and I'm hoping to get to that soon.

Has anyone else read a good romance by Georgette Heyer? What romances are you reading for the Back to the Classics Challenge?
Posted by Karen K. at 5:07 AM