Journey Into the Whirlwind by Eugenia Ginzburg 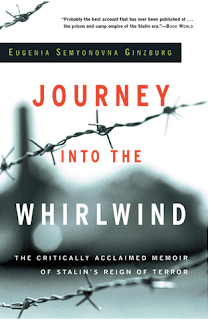 Our library has a cart in the vestibule where people can leave books and take books whenever they want, and I've found some real treasures. Last summer I found a copy of Journey Into the Whirlwind by Eugenia Ginzburg, which I recognized as a recent Persephone reprint (though not a beautiful Persephone copy, sadly). It probably would have lingered on the shelves for years but it came back on my radar when I saw it listed on David Bowie's top 100 book list. I also realized it would fit the Russian classic category in my own challenge.

I was a little apprehensive to read this book because a memoir about Stalin's reign of terror doesn't sound like the most cheerful of reads, especially during a dreary winter. However, I do love memoirs and survival stories, and this is both. Ginzburg was 30 years old in 1937, a teacher and active Communist Party member. After a co-worker at her university was arrested, Ginzburg was hauled in for questioning and ordered to denounce him. After she refused, she was arrested herself on trumped-up charges and accused of being a Trotskyist.  What follows is a Kafka-esque downward spiral that is so ridiculous and frightening it's almost hard for me to believe, having been raised in a democracy where anyone who's watched a TV police drama understands Miranda rights.

After a seven-minute trial, Ginzburg was sentenced to 10 years in prison. The book covers the first three years of this nightmare, including two years in prison under terrible conditions, an excruciating journey across the continent to Vladivostok (jammed in a train car with more than 70 other women, with no bathroom and very little water); a boat journey that sounds reminiscent of a slave ship; and finally, a work camp where the already weak prisoners were forced to cut down trees and hack at the frozen ground while underfed and under dressed in the frigid weather. It was like the nine circles of hell, and it doesn't seem like things can get any worse for her -- until they do.

This book was just horrifying, yet fascinating. If I hadn't known it were non-fiction I probably would have returned the book to the donation cart, but I couldn't stop reading. Ginzburg was determine to stay alive just to spite her captors. And though there was cruelty, it was inspiring to read how the prisoners tried to help one another, often in tiny but meaningful ways like sharing a sip of water or a hoarded sugar cube. Even the prison staff sometimes showed humanity and kindness which led her to survive. Somehow, she managed to survive a total of 18 years in the Soviet gulags.

We were still living in that bitter-sweet world of feeling which our prison life in Yaroslavl had created for us. I felt instinctively that as long as I could be stirred to emotion by the sea breeze, by the brilliance of the stars, and by poetry, I would still be alive, however much my legs might tremble and my back bend under the load of burning stones. It was by preserving all these treasures in our minds that we should resist the onslaught of the horrors around us.

This was a difficult read because of the subject matter -- I could only read a few chapters at a time before I had to put the book down and read something else. But it is well worth reading as a story of survival and hope.

I'm counting this as my Russian Classic for the Back to the Classics Challenge and also for the European Reading Challenge.
Posted by Karen K. at 4:37 AM