The Claverings by Anthony Trollope 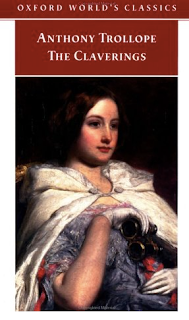 I cannot believe that The Claverings is the 25TH BOOK I've read by Anthony Trollope! (24 novels so far, plus his Autobiography.) When I started reading Trollope back in 2008, I never imagined I would read and love so many of his novels. Granted, some are better than others, but there are only a few so far that I didn't love or really enjoy.

And The Claverings is definitely near the top of the list -- it's been described as one of his best novels and sadly, I think it gets overlooked compared to the Barsetshire and Palliser novels, and his more famous stand-alone novels like The Way We Live Now (The Claverings has a mere 361 ratings on Goodreads, compared to Barchester Towers which has more than 10,000!). But it is a nearly perfect novel -- a great love triangle, some villainous characters, a couple of angelic young women in need of husbands, comic relief -- it has everything wonderful and comforting I have come to expect in a Trollope novel.

But I suppose I should give some information about the plot. At the beginning of the novel, Harry Clavering is a young man from the poorer branch of a titled family (his father was the second son of the aristocratic Clavering family; his uncle has died and his cousin, Hugh, is Lord Clavering, head of the family. Harry's father, like so many second sons, joined the clergy and holds the living at rectory).  Harry is in love with his cousin Hugh's sister-in-law, the beautiful Julia Brabizon. But there's no money, so Julia marries an older rich man, Lord Onger, instead, breaking Harry's heart.

About a year later, Harry has decided he doesn't want to follow in his father's footsteps in the clergy and decides to become an engineer instead. He joins a family business and falls in love with the youngest and brightest daughter, Florence. She's not a great beauty like Julia but is bright, steadfast and true and will make Harry very happy, and they become engaged. Harry would like to get married soon but Florence puts him off until they can afford it. . . aaand there's trouble in paradise, because Lady Julia Onger is back in the picture as a beautiful, wealthy widow whose abusive and alcoholic husband has luckily died quickly, though not before stirring up trouble with Julia's reputation. Now Harry faces a quandary -- should he throw over the charming and faithful Florence for the love of his life? Does Julia still have feelings for him, as well as her 7000 pounds and a life interest Onger Park, her late husband's estate?

This is classic Trollope, and I enjoyed every minute of it. Florence is sweet but not saccharine and pointless like so many Victorian ingenues; Harry's sister also has a doomed love affair with a poor curate; and there's comic relief with Lord Hugh's feckless younger brother Archie who'd love to get his hands on Julia's fortune. There's also a sleazy European Count Pateroff who's wooing Julia, and his shady sister Sophie who pretends to be Julia's best friend.

Even though the ending was predictable, I loved this book. It's one of his domestic novels, so no politics like the Pallisers novels, which might put some people off; and though Harry's father is a vicar, there's not a lot of religious hierarchy which I sometimes find confusing. This would be a great introduction for someone who wants to try Trollope but doesn't want to start a six-book series, or someone who's daunted by a whopping 800-page triple-decker like The Way We Live Now.

Bloggers, have any of you read The Claverings? And what are your favorite Trollope novels?
Posted by Karen K. at 8:00 AM