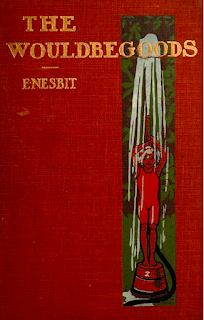 Also known as The Wouldbegoods by E. Nesbit. Inspired by Better Book Titles, I've decided to title my book reviews to better reflect what I really think about a book. (Also I feel like I need to liven up my reviews a little bit, as they've been feeling a bit stale lately. I may actually go back and retitle some of my previous posts).

Anyway, The Wouldbegoods is essentially a turn-of-the-century version of Junie B. Jones with better writing -- children who do all the things that real children would like to do, but really know better (one hopes). Published in 1901, this book is full of what I would call Teachable Moments which are hilariously funny. The Bastable children from the delightful book The Story of the Treasure-Seekers have returned in another installment, this time in the country over the summer holidays. Since they can't stay out of trouble in London, the six children been sent to stay in the country with two other children Dennis and Daisy, supervised (in theory) by Albert-Next-Door's-Uncle, the writer, who seems to be so engrossed in his writing he pays little attention to eight children. The children have all vowed to be Good and create a Secret Society called The Wouldbegoods, for which they will do Good Deeds and Help People. Naturally, hilarity ensues because nothing ever goes as planned.

As always, Nesbit's writing as the voice of a child is spot-on:

You read in books about the pleasures of London, and about how people who live in the country long for the gay whirl of fashion in town because the country is so dull. I do not agree with this at all. In London, or at any rate Lewisham, nothing happens unless you make it happen; or if it happens it doesn’t happen to you, and you don’t know the people it does happen to. But in the country the most interesting events occur quite freely, and they seem to happen to you as much as to anyone else. Very often quite without your doing anything to help.

Clearly, Victorian children ran amuk with little or no supervision, and the adults are shocked -- shocked, I say! when they get into all kinds of trouble, much of it requiring vast expenditure to make right. (I suspect family's newfound fortunes from previous book are squandered to pay these bills). The results are often laugh-out-loud funny but also shocking to a modern adult -- there are chapters including stranger danger, a kidnapping, and a loaded firearm! After the first couple of episodes, you'd think that either the adults or the children would start to learn from their mistakes, but this is a book meant for children so nobody does (otherwise, it would make for a very dull story). But I enjoyed the heck out of it and found myself alternately snorting with laughter or yelling "Noooooo!" while reading. 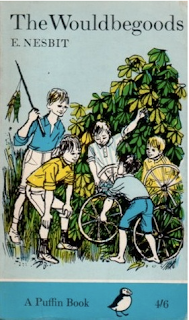 The Wouldbegoods is sadly out of print, but used copies are available and it's also in the public domain. I've now read six of Nesbit's books for children, and I've decided I really prefer those with little or no fantasy elements. I find the antics of children in our world much more amusing than those in fantasy lands. I also own a copy of Nesbit's book for adults, The Lark, which has been newly reprinted by the Furrowed Middlebrow imprint of Dean Street Press (readily available via Amazon and The Book Depository).  It's making quite a stir in the blogosphere, thanks to the Furrowed Middlebrow blog and also by Simon at Stuck in a Book. I hope it will be equally delightful.

I'm counting this as my Children's Classic for the Victorian Reading Challenge.
Posted by Karen K. at 2:49 AM