The Prime Minister by Anthony Trollope 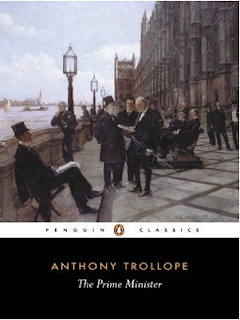 Also known as "Be careful what you wish for, because you might actually get it."

The fifth novel in the Pallisers series by Anthony Trollope, The Prime Minister is actually two overlapping stories: the first, about the Duke of Omnium, Plantagenet Palliser and his wife Lady Glencora, and his rise to power as the eponymous Prime Minister; the second, the romance between Emily Wharton, a sweet young thing from a Good Family (with a possible inheritance of about 20,000 pounds) and an up-and-coming financier named Ferdinand Lopez. Lopez is a friend of Emily's brother, the somewhat ne'er-do-well Everett, and nobody seems to trust him because although he was born and raised in England and was educated in English schools, nothing is known about his background. Is he an adventurer trying to get his hands on her money? Or is everyone else just racist and assuming the worst because -- wait for it -- he father was Portugese? Oh, the horror!

Ferdinand is wooing Emily pretty hard, despite the adoration of her childhood playmate Arthur Fletcher, whom everyone (including Arthur) assumed she would someday marry. Meanwhile, Planty Pall is named Prime Minister of a coalition government. It should be the pinnacle of his career, but he's not really good schmoozing and creating political alliances. He's a little thin-skinned and really just wants to do what's Best and what's Right, which (sadly) isn't necessarily what makes a good politician. His wife Glencora embraces her role as the PM's wife and spends masses of money to entertain, in London and at Gatherum Castle, their country estate (there are some pretty hilarious bits about the preparations at Gatherum that reminded me very much of Downton Abbey).

Emily and Ferdinand's romance does not turn out how she expected; and Lady Glen has some disappointments -- she was so hoping to become a Great Lady, a Queen Bee of society with salons and parties. She even tries her hand at political influence, which backfires spectacularly. It all ends for the best but is definitely bittersweet.

I think Trollope did a great job intertwining the political and the domestic stories in this novel. Some of my favorite characters make appearances, including Phineas Finn, his wife Marie Goesler, Lizzie Eustace and even the Greshams from Doctor Thorne show up (though it's been so long since I read that novel, I didn't even connect them at first). Some of the politics did get a bit tedious for me but Lady Glen is one of my favorites.

However, I did have a couple of issues with this book. Once again, Trollope has created an ingenue (Emily) that is just unrealistically self-sacrificing. It must be some kind of Victorian trope, because I really wanted her to grow a backbone and stand up for herself. She's one of these characters that doesn't believe she deserves happiness. I did want to jump into the book and give her a good talking-to. 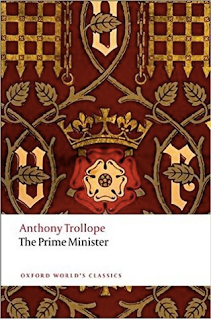 Also, there are a lot of anti-Semitic slurs about Ferdinand Lopez. I don't even actually remember if there's any basis and he's actually Jewish or not, but either way, it was disturbing. I feel like Trollope was sending a message that Outsiders Are Bad -- given the current political climate, it made me particularly uncomfortable (though the idea of a coalition government was also mind-blowing -- I can't imagine that ever happening in the U.S.!)

Overall, I really did enjoy it. Trollope creates such vivid characters that I really got invested in them, despite their flaws (or lack of them). I've just bought the recently restored version of The Duke's Children that is finally available at an affordable price, and I'm looking forward to reading the final volume of the Pallisers.  I'll be a bit sad when I've finished the whole thing.
Posted by Karen K. at 10:43 AM