The Zookeeper's Wife by Diane Ackerman 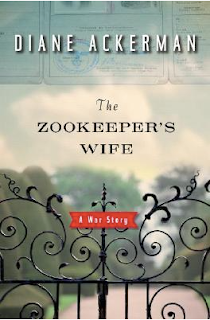 I'm nearly always way behind reading the popular new books. I do like nonfiction and WWII is always interesting, so I thought The Zookeeper's Wife would be a good choice for a book about Poland for the European Reading Challenge. It's quite a popular title right now as there's a movie adaptation coming out soon (there is a huge waiting list for digital downloads at my library and I was lucky to get it but had to rush through the end before my download expired).

So, this is the story of Antonina Zabinski, the wife of Jan Zabinski, the head zookeeper at the Warsaw Zoo during the 1930s, who lived in a villa within the zoo with their young son Ryszard. After the siege of Warsaw in 1939, most of the animals that survived were split up and set off to zoos in Germany. Antonina and Jan managed to stay in their villa and secretly house Jews in empty cages, zoo buildings, secret passages, and even in their own home. Most of the Jews stayed only temporarily before moving on to safer housing, as the zoo was too close to the Nazis. Ackerman describes how the Zabinskis cleverly outwitted the Nazis on multiple occasions, and their bravery and dedication to protecting Jewish refugees that numbered in the hundreds over the course of the war.

Of course, as zookeepers, there are a lot of animals in the story. Before the war, Jan and Antonina hosted and nursed orphaned and wounded animals and had quite the menagerie living with them, and they kept as many animals with them as possible during the war, as pets and for food. They were able to stay on the zoo grounds, first converting the zoo to a pig farm, then a fur farm. Jan was active in the underground Polish resistance and their friends included artist Magdalena Gross and Irena Sendler, who herself smuggled more than 2,500 Jewish children out of the Warsaw ghetto.

I liked this book, but it wasn't quite what I expected. I'd read Ackerman's A History of the Senses years ago and liked it, but I just remembered it was rather new-agey and I was surprised that she would would write about zookeepers hiding Jews. The story of the Zabinskis is really interesting but Ackerman didn't really seem to write it as a straight narrative of their wartime experiences -- there are a lot of digressions about animals, nature, and art, mostly relating to the Zabinski's friends and guests.

I had tried reading this book around the time it was first published but I put it down because I wasn't in the mood for a serious book about the Holocaust -- there are so many books about the horrors of WWII and I find that I can only read so many. The Zookeeper's Wife does include sections about Nazi atrocities, especially in the Warsaw ghetto, but it's not the entire book. There's a lot in here that's really worth reading and I'm curious to know how it will compare to the movie adaptation. I looked online and it was actually filmed in Prague, not Warsaw.
Posted by Karen K. at 1:58 AM