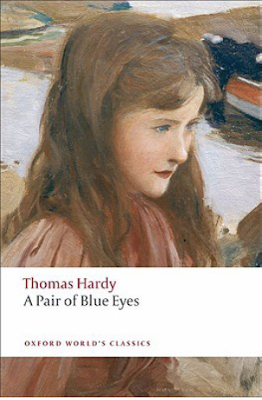 I hadn't planned on reading two books by Thomas Hardy back-to-back, but Under the Greenwood Tree was so short that I felt like I hadn't given Hardy enough attention. (Also, my San Antonio library card is expiring soon, and the Air Force Library didn't have it on audio). A Pair of Blue Eyes is another of Hardy's lesser-known early works, but it was much better than I expected and I think I liked it nearly as much as Far From the Madding Crowd, which is my favorite Hardy book so far. It's got plenty of drama and pastoral scenes, and a really interesting premise.

So. This is the story of young Elfride Swancourt, daughter of a widowed vicar in Wessex. When the story begins, she is awaiting the visit of an architect who is coming from London to make some drawings and plans for renovating her father's parish, where they have lived for a year or so. Unfortunately her father has had an attack of gout and is confined to his room, so Elfride will have to act as hostess to this dull man. Little does she know!

It turns out that this architect (assistant, really) is Stephen Smith, and he is young and handsome, and nearly the same age as she -- about twenty. Sparks fly, her father takes to Stephen, who is intelligent and well-spoken, and Stephen extends his visit as long as possible. Reverend Swancourt invites him to come back for a longer visit when he gets his holidays. Sounds great, right? But of course not, the path of true love never did run smoothly. It turns out Stephen is unworthy of Elfride, and after a secret engagement, he goes off to India to seek his fortune so he can make a proper offer.

Meanwhile, Reverend Swancourt decides he needs to get Elfride married off as soon as possible, and produces a wealthy stepmother to help guide her along the way. After some time in London, the new Mrs. Swancourt (who is not the evil stepmother I was expecting) invites her cousin Henry Knight for a visit. Henry is a clever yet somewhat pedantic writer -- who happens to be Stephen's former tutor and mentor. (Where would Victorian literature be without these amazing coincidences?) Naturally, Henry becomes enamored of the beautiful Elfride, and she's challenged by his intellect. Of course, she begins to forget about Stephen, who is already en route from India. Thus the love triangle ensues. There is plenty of drama, and descriptions of walks in the woods, and a narrow escape from death on a cliff which I still can't picture exactly in my head. (Apparently this scene may be the origin of the literary term "cliffhanger.") 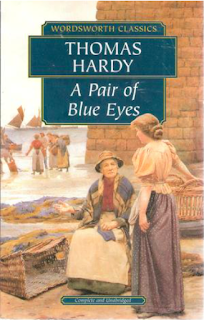 I really enjoyed this book but I definitely had some issues with some of the characters, especially Henry Knight, whom I would have loved throttling. Some of the symbolism was kind of heavy-handed and there was definitely a lot of foreshadowing, and a plot twist at the end that I saw coming from a mile away.

Also, there's a lot of Victorian attitudes about women in this book that made me roll my eyes so hard I was afraid they'd fall out of my head -- hopefully that was Hardy's point. I don't want to give away too much but there were some parallels with this novel and Trollope's Linda Tressel -- but I liked this one much more, probably because there was a lot more character development and I guess I kind of expected the melodramatic ending from Hardy more than Trollope. I might even classify A Pair of Blue Eyes as a Victorian sensation novel -- it was published in 1873, only two years after Desperate Remedies, which apparently falls in the sensation category so I'd really like to read it also.

I've never read any Victorian authors' works in order of publication, but I think that would be really interesting to see the progression -- I can see how A Pair of Blue Eyes is more complex and dramatic than Under the Greenwood Tree but it's not nearly as tragic as The Return of the Native or Tess of the D'Urbervilles. I still haven't read Jude the Obscure but I've definitely gained a new appreciation for Hardy -- I might even reread Tess and actually like it this time around.

I really did enjoy this book, which I've owned for more than ten years, and I'm looking forward to reading more Hardy. Which should I read next -- one of the early novels, like Desperate Remedies? Or should I skip to the end and tackle Jude the Obscure?
Posted by Karen K. at 4:54 AM