The Jewel in the Crown by Paul Scott 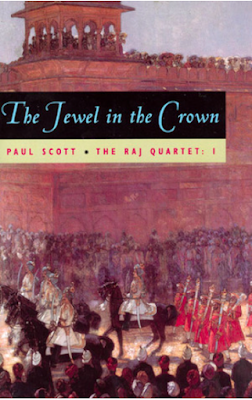 After watching the Masterpiece drama Indian Summers in 2015/2016 I became fascinated with the British Raj. I was really annoyed when the series wasn't renewed so to comfort myself I searched for as many books as I could find about the period, and The Jewel in the Crown was at the top of my to-read list. I received the first book of the series for Christmas last year and realized is almost 500 pages of tiny print and it is dense. Luckily, it was also available on audio via digital download from my library! It took me more than a month to listen to the audio on 1.25 speed, but I finally finished it.

Here's the setup: most of the story takes place in 1942 in Mayapore, a fictional place in India, towards the end of the British Raj, or authority over India. It's pretty obvious the Indian population is ready for independence but the British are resisting, using the war with Japan as an excuse -- they are afraid that a Japanese invasion will loosen their final hold on India. After the Indian National Congress votes to support Gandhi, riots break out, and a young English woman named Daphne Manners is raped and a group of young men are arrested by the local police. The police sergeant has ulterior motives because he is in love with Daphne, but she's actually in love with an Indian journalist, Hari Kumar, who is among the group of innocent men arrested and tortured. The same evening, another British school teacher named Edwina Crane is attacked by a gang as she drives back to Myapore from a remote village. She isn't physically harmed but her companion, an Indian teacher from the school, is beaten to death by the gang as she looks on in horror.

The format of the book is unusual, not told in traditional chapters, but in different long sections which are alternately third person narration of different characters, police reports, interviews, and diary entries. It seemed a bit disjointed at first, changing viewpoints every 50 or 100 pages, but the reader begins to get a more complete picture of the complicated relationship between the British and the Indians in the years before the end of the Raj. The narrators and writers are both Indian and British, and though I liked the audio version (which clocked in at more than 22 hours), but the narrator has a very clipped, posh accent for the British characters, but I didn't much care for the accent he gave the Indians. 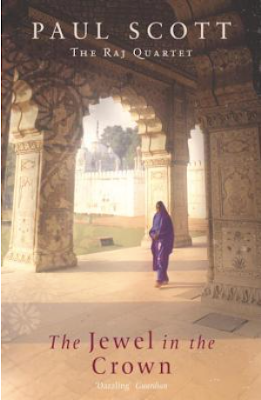 Overall, though, I really found the story fascinating, even though the central event is quite brutal (though it's never described in specific detail). I feel like Daphne and Hari's relationship was symbolic of the relationship between India and Britain, and how things could go horribly wrong. It's always tricky reading colonial literature written by white people but Scott takes a really unflinching look at the British in India, and it isn't very flattering. He also takes some serious jabs at both the British and Indian class systems, and the racism between the British and Indians is just devastating and extremely timely.

I found Hari and Daphne's story really heartbreaking, but the book is really engaging as soon as you get used to the format and I'm eager to read the next three volumes. The other three are also available on audio digital download but I think I need to take a break before diving into the next one as they're equally long -- the final volume is more than 600 pages in print and more than 27 hours of audio! There was also a TV adaptation filmed in the 1980s that was voted one of Masterpiece Theater's all-time favorites, but I will probably wait until I've finished reading (and listening) to the books before I watch it.

I'm counting this as my 20th Century Classic for the Back to the Classics Challenge.
Posted by Karen K. at 1:51 AM

Labels: Back to the Classics 2018, India, mid-century