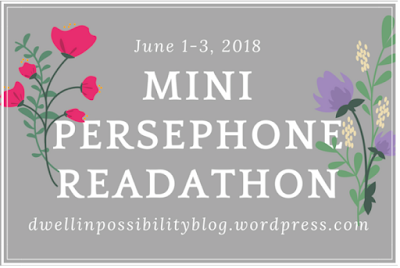 In theory I should sit down instantly and record my thoughts about a novel as soon as I've finished it, but sometimes I really need to take a day or two to mull over and absorb first. I had hoped to write this post yesterday in time for the Mini Persephone Readathon hosted by Jessie at Dwell in Possibility but as is often the case, I'm a day or two behind. I did zoom through my selection, Heat Lightning, in just over two days, which isn't bad considering I had three other books in the rotation.

Nevertheless. Helen Hull's Heat Lightning, published in 1932, is one of the few American Persephone novels, and like many books about domestic life, it is about nothing in particular and everything at the same time. Set in the hot, airless summer of 1930 in a fictional small town in Michigan, it's the story of thirtyish Amy Norton, who has left New York City for a family visit. Her husband is off fishing in Canada (as my own father used to do); and her two children are away at camp.

Amy is the prodigal daughter, the only one to move Far Far Away from her hometown, where her extended family still live. Her late grandfather was a successful businessman, and her family are the prominent Westovers, who own a plough factory and like so many of the period, are facing hard times after the financial crisis of 1929. Amy's visit coincides with the early delivery of her younger sister's baby (her fourth or fifth daughter), plus a number of other family crises in which quite a few family secrets, prejudices, and scandals are revealed. The center of this story is the matriarch, Amy's grandmother, who lives next door to her parents and pretty much still rules the family with a firm but loving hand.

This novel started out a little slowly with Amy's arrival into town, but picked up pretty quickly with the reveal of a pretty big family secret, and kept on rolling from there. There are a lot of family members -- sisters, brothers, cousins, in-laws -- and I was happy to see a list of the characters and their relationships listed in the front. I'm sure I would have gotten the story quite confused without it. I'm not sure if it's the sign of good or bad writing if the author has to list it up front, but I was glad to have it.

Ostensibly this is a domestic novel, but it was really a sort of microcosm about life in that time period. It's rather timely with some talk about immigration and "foreign invasion" -- which include Italian immigrants (with a few slurs); a French sister-in-law who I can only assume is a war bride; a cousin's wife who is the child of German immigrants; and a Lithuanian domestic, who had been referred to as being of "a different race." I can only imagine how the Westovers would have reacted to  my mother's family of Polish/Germans, who were farmers in Alpena which is northern Michigan.

Heat Lightning also has some really good and insightful writing about family life and marriage, as Amy begins to reconcile her family's history and relationships, and the struggles within her own marriage are revealed. I really enjoyed this book and I'm glad that Persephone chose to reprint it as one of their American selections.

Finally, I have to make a comment about the endpapers, which are one of the nicest features of Persephone books. I imagine that the publishers tried to find an American fabric from the period to use, and I was delighted to see on the website that the name is "Memories of the Alamo" -- not quite the Midwestern setting of the book, but I love that this book set my home state of Michigan also incorporates a little bit of San Antonio, where I spent eleven years. If you look closely you can see that iconic Texas building in the print.

This is my seventh book for the TBR Pile Challenge 2018. And thanks again to Jessie at Dwell in Possibility for hosting the Mini Persephone Readathon which inspired me to read this book.
Posted by Karen K. at 3:26 AM