Jude the Obscure: Possibly the Most Depressing Book Ever 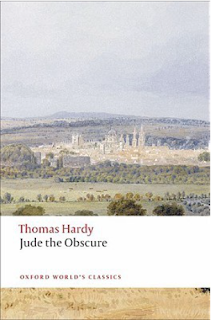 I hadn't planned on reading a third Hardy novel this year (I read Under the Greenwood Tree and A Pair of Blue Eyes practically back-to-back) but recently comedian Michael Ian Black started a podcast called Obscure in which he reads one chapter of Hardy aloud per week, interspersed with his comments. He goes off on tangents and does terrible accents for some of the characters, and I find it delightful. However, if I read along with Michael, it would take nearly a year to finish Jude, so I've read ahead. And let me tell you, Hardy deserves the reputation of my first impressions. Jude has four main characters who are all miserable, and terrible things happen to them. It is possibly one of the most depressing books I have ever read.

Here's the setup: schoolteacher Mr. Phillotson is packing up and leaving a small village in Wessex to continue studying at Christminster, a large university town (based on Oxford). Young Jude Fawley, a bright but poor pupil, is sad to see him go and vows to someday go to Christminster himself to study. As a poor boy with no resources, and being of a lower class, this is practically impossible. He lives with his great aunt who is full of dire predictions about the Fawleys, and how they should never marry, that they are essentially cursed.

Nevertheless, Jude works hard, gets hold of some Greek and Latin grammar books, and does his best to study on his own. As he grows up, he begins training as a stonemason, while still improving himself by studying late into the night. Then his plans are sidetracked one day when he is literally hit in the face (with pig offal, no less) by a sultry temptress known as Arabella.

Yes, women are the root of all evil. Jude is a strapping young man and he is distracted, as is to be expected, by the temptations of a woman. One thing leads to another and rather than the shining halls of Christminster, Jude is led down the aisle by Arabella because she has led him to believe that she is In Trouble. Eventually, their marriage turns sour and they separate. Jude vows to begin a life of chastity and study. However, he tracks down his cousin, Sue Bridehead, in whom he finds a kindred spirit. Sue everything that Arabella is not. Of course, he falls in love with Sue but can't have her. 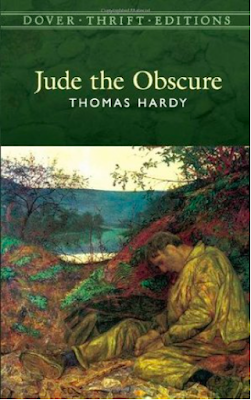 So, the lives of Jude, Sue, Arabella, and his old schoolmaster Phillotson become entwined and tragic. I was actually sort of enjoying this book, despite the dire predictions and rumors that this book was really sad. Things weren't looking great for Jude and Sue, but I was going along with it, then BAM! About 3/4 of the way through I was absolutely blindsided by a plot twist that was so unexpected and horrible I gasped aloud. I was absolutely gobsmacked and had to stop reading (well, listening, as I was in the car with the audiobook.) It was almost 24 hours before I could pick it up again and I did not know what could possibly happen next -- how could things get worse? (They did.)

Clearly, Hardy had some very serious thoughts about the nature of marriage and love and happiness. I had read a bit about Hardy in Wikipedia and I knew that he had a very unhappy marriage; also, that Jude the Obscure was so controversial for its time, and that there was a great deal of backlash. Though Hardy lived another 30 years after the publication of Jude in 1895, he never published another novel, just plays and poems.

I cannot say that I liked Jude, but I can appreciate the writing and parts of the plot, but I don't think I can forgive Hardy for that terrible plot twist. Jude the Obscure definitely gets my vote for Most Depressing Book Ever.

There is also a film adaptation from 1996, which is out of print but there are still copies floating about. One of my library's branches has a copy so I put in a request. It is supposedly en route but now I don't know if I can bear to watch it. It does star Christopher Eccleston so it might be worth a look, but I just don't know. Here is a still from the film with Jude and Kate Winslet as cousin Sue: 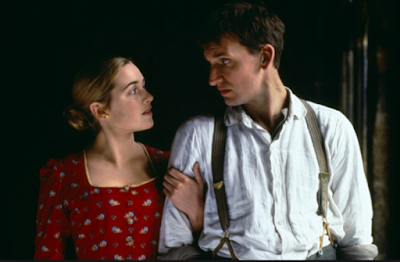 The wonderful Rachel Griffiths is Arabella and Liam Cunningham is Jude's former tutor Phillotson. Who knew that the Onion Knight from Game of Thrones was in a Hardy adaptation? He is my favorite GoT character so I might take a look out of curiosity.


Should I bother watching the film version of Jude? Is it the most depressing book ever? Should I give Hardy another chance or are all of his novels just soul-crushing?

I'm counting this as my Classic That Scares You for the Back to the Classics Challenge.
Posted by Karen K. at 5:05 AM