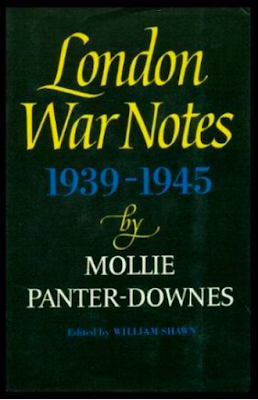 It's taken me more than two months, but I've finally finished London War Notes, my tenth book for the TBR Pile Challenge 2018. First published in book format in 1971, this is a collection of essays written biweekly for the New Yorker during World War Two. It remained sadly out of print for many years until Persephone books republished it in 2014. I'm quite fascinated by the war years, particularly the war at home, so I was sure this would be right up my alley. Only the length had discouraged me since I bought it four years ago and I thought this would be a good time to get to it.

Of course these essays discuss a lot of what's going on in London and the surrounding area during the war, especially the bombings, there's definitely a lot more history about the battles and the politics that were going on. There has been so much written about the war (go into any Barnes and Noble bookstore and you will be amazed at how many nonfiction books there are about WWII), but so much of what's published is centered around Europe, I'd forgotten how critical the battles in North Africa and the Far East were, especially places like Burma and Singapore. So much of what Americans associate with WW2 in Asia is centered around Japan -- I didn't really realize how significant the loss of Burma and the rubber plantations was to the war effort and everyday life in Britain. I did have to stop a number of times and look up historical events mentioned in the book that would have been common knowledge at the time of publication.

The other thing that really struck me about this book was the overwhelming sense of anxiety. As an American growing up in the late 20th and 21st century, I cannot imagine living with the thought that you could be bombed at any moment, to be evacuated from your home, or to have to endure rationing for food, clothing, and fuel. It's a little easier to read knowing that the war would be won, but it must have seemed like it was dragging out forever -- and of course rationing didn't end for a long time afterward. I've been a little disappointed being unable to buy Warburton's crumpets the past few weeks because of the CO2 shortage, boo hoo.

I do, however, think that I can relate to the sense of anxiety. Every day when I wake up and look at the news, I keep waiting for the worst, and wonder how much longer it will get worse before it gets better. I know a lot of Americans are feeling similar anxiety. I'm sure it's worse for people actually living in the U. S.


I'm very glad I read it, but this is the slowest I've read any book for this challenge, in this year or previous years. I suppose was a mistake to be reading this 459 page nonfiction book about World War Two at the same time I was reading a 661 page memoir about World War One (Testament of Youth). You think? I did in fact take a long break from London War Notes in June. I thought that it would be easy to pick it up again halfway, but I was wrong -- I really feel like I lost momentum.

And now for a lighter anecdote! Reading this book also reminded me of one of my visit to the Churchill War Rooms during one of my visits to London. It's part of the Imperial War Museum and is really fascinating -- the underground bunker where Churchill and others lived, worked, and slept during the war. It is quite fascinating and there were a lot of interesting displays. Of course one has to walk through the gift shop on the way out and this was one of my favorite purchases: 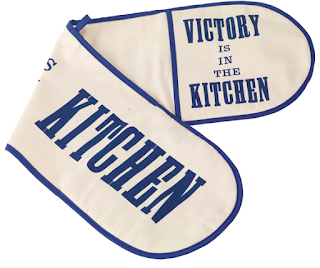 Yes, these are two-handed oven mitts with a wartime propaganda slogan. I got it as part of a set with a matching apron (also available as a tea towel). There were a lot of fun postcards and prints with wartime slogans. Here's another of my favorites: 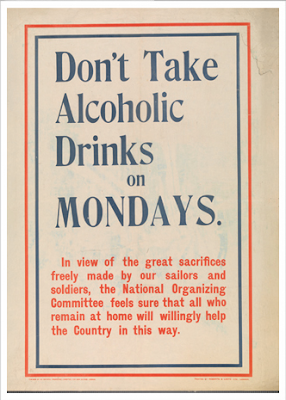 It's really worth visiting if you're in London and have any interest in wartime history. There's also an online shop here if you just want the oven mitts or the poster version.

So -- that's book #10 for my TBR Pile Challenge 2018! I'm making good progress and hopefully I'll complete the last two AND my two alternate reads this year! How is everyone else doing with their TBR piles?
Posted by Karen K. at 5:44 AM