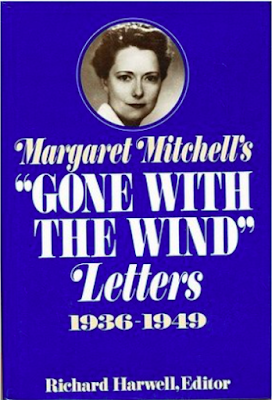 One of the nicest perks of working in a library was getting first pick of the donated books for the semi-annual Friends of the Library sales. Gone with the Wind was one of my all-time favorites, so I was naturally intrigued by Margaret Mitchell's "Gone With the Wind" Letters, 1936-1949, and was happy to part with $1 for this edition from 1976. Of course it only took me five years to get around to finally reading it.

As the title indicates, this book is a collection of letters written by Margaret Mitchell regarding her iconic novel Gone With the Wind, first published in 1936 and famously adapted into a blockbuster movie in 1939. It's a really interesting chronicle of how GWTW exploded into an international phenomenon and affected Mitchell for the rest of her life, not to mention her husband and indeed the city of Atlanta. The letters are chatty and for the most part interesting, and it's quite fascinating to see how this novel became such as sensation.

Margaret Mitchell was a born-and-bred Atlantean, and grew up hearing stories of the Civil War and Reconstruction. She was born in 1900 and attended Smith College and originally hoped to become a psychologist, but left college when her mother died suddenly and never graduated. She returned to Atlanta to keep house for her father and eventually got a job as a reporter for the Atlanta Journal in the early 1920s. After her marriage to attorney John Marsh, she suffered an ankle injury that didn't heal, so she was forced to quit her job. Spending months bedridden, she read nearly every book in the library and out of frustration, her husband brought her a stack of paper and a typewriter and told her to write her own novel, which she did over a period of about three years.

The novel then lay unpublished in manuscript form for several years, until MacMillan editor Harold Latham came to town. Goaded by a braggart acquaintance who claimed her own manuscript would win a Pulitzer while Mitchell's would never be published, Margaret grabbed most of the envelopes with the manuscripts and gave them to Latham as he was getting on the train, so that "at least she could claim that she'd been refused by the very best publisher." She was given a contract and merely hoped that the publishers would make enough to cover their costs, never dreaming that it would be of interest to anyone but the most hard-core Atlanta fans and Civil War buffs.

GWTW then became a massive success, winning the Pulitzer Prize and becoming one of the best-selling novels of all time. The book of letters was really interesting to me, to see her perspective and all the problems the attention from her book created, with fans constantly hounding her for autographs, other authors claiming plagiarism, issues from foreign publishers pirating the books, and then the whole circus that erupted after the movie adaptation was announced. It was an absolute circus, and I can't even imagine how much worse it would have been today with the internet and social media. Mitchell was basically hounded for the rest of her life, and never had time to write another book. With all the hullaballoo, I I'd be surprised if she weren't sick to death of it, not to mention the pressure she would have been under if she had written a second book.

This book is very interesting to learn the context of the publishing and the movie adaptation, especially with the looming backdrop of WWII. There are also a lot of letters written to other authors that she enjoyed, mostly history but there are poets and other contemporary authors mentioned, including Betty Smith who wrote A Tree Grows in Brooklyn. I was also delighted to find a letter from 1946 to a writer from the New York Herald Tribune in which she requests the address of Angela Thirkell so that she can send her a holiday care package during the severe rationing in Great Britain after the war. She mentions how much she loves Thirkell's novels and is about to read Miss Bunting (#14 in the Barsetshire series, which I haven't yet read).

For me, the collection of letters did rather slow down after the war years, I suppose because much of the attention toward GWTW had died down. The last letter included is from July 1949, just a few weeks before Mitchell's death after being hit by a drunk driver. The book ends after the last letter, without any mention of her death, or any biographical details, so I suppose I'll have to track down a biography, and of course I have to watch the film adaptation of GWTW, now that I've already re-read that book as well.

But that's three books finished for the TBR Pile Challenge -- I still have a biography of Edith Wharton and a memoir by Elizabeth Jane Howard, so that makes four books by and about 20th century female authors for this challenge.
Posted by Karen K. at 12:37 PM