I don't know who I can credit for recommending Crossriggs -- I'm sure it was someone in the blogosphere, and I wish I knew so I can thank them. (Updated: it was Furrowed Middlebrow!) This book is exactly in my wheelhouse, including :
Basically, a trifecta of all the things I love in a book. Published in 1908, Crossriggs is the story of Alexandra Horn, a woman in hear late twenties/early thrities, living with her father in the village of Crossriggs which is "about an hour's train ride from Edinborough. Besides the Horns, there are three or four other families of note around which the story is centered. Alexandra, known as Alex, has been living rather quietly with her father, an educated man with interesting and progressive ideas (but not much money) when her recently widowed sister Matilda arrives in tow from Canada with her five (!) children. The eldest daughter is 13, then there are three boys in a row, and finally a baby girl.

Of course this throws the whole house into turmoil, but Alex and her father take it all in stride until they realize they will be more financially strapped than ever. Her father borrows some money from a close neighbor, Mr. Maitland, but Alex is aghast and vows to find a way to earn some ready cash. She begins by reading every day to a blind neighbor, the retired Admiral Cassilas, who is kind but somewhat gruff and snobbish. The admiral's only living relative is his grandson, Vanbrough, who has just finished school and is about twenty-one. 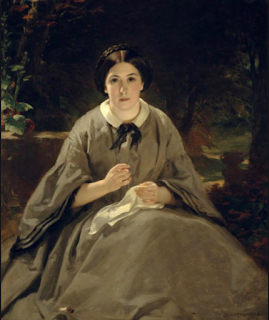 A better image of the cover artwork.
It's "Lady in Grey" (1859) by Daniel Macnee, National Galleries of Scotland

Young Van is bored staying at gloomy Foxe Hall with his grandfather, and the two don't always see eye to eye. He quickly strikes up a friendship with Alex and spends more and more time with the loud and boisterous Hope family. Eventually, his grandfather starts parading a succession of eligible young women around Van, and Alex's sister is pressuring her to accept the hand of James Reid, who is good steady but whom Alex finds dull. And Van is jealous of her friendship with their neighbor Mr. Maitland, who seems excessively fond of Alex, who is married with a sickly wife. Eventually this love triangle (or quadrangle?) comes to a head, and after a dramatic turn of events, there is a tragedy.

I really enjoyed this book -- it reminded me a bit of Jane Austen, but also a little bit of Anne of Green Gables. I really liked that Alex was trying to make her way in the world without just husband hunting -- she seemed like a new modern woman. The plot moved along nicely, and though it's almost 400 pages long, it seemed shorter, probably because the Virago edition had very wide margins.

This book had some interesting plot twists. There was a lot of foreshadowing about the three men who seemed interested in Alex, so I had strong suspicions about how it would all end up -- and I was right about some of the events, but not the characters I was expecting, if that makes sense. And I was amused by Alex's father, who was a "fruitarian" -- basically, a vegetarian who made the family eat crazy things like nuttose, an early meat substitute developed in the late 1890s. They were also forced to eat carrots, of all things! Apparently this was a vegetable only fit for horses.

Aside from some cringey racism, I liked this book very much, though the ending was a bit rushed. I did like how Alex's story was wrapped up, which was not how I expected. I would like to read more by the Findlater sisters, who wrote books individually and together. Sadly, I don't think any of their other books are readily available. Crossriggs is currently out of print, but there are used copies of the Virago Modern Classic edition available at a reasonable price online. And I've just discovered it's available as an audio on BBC Radio 4!

I'm counting this as my Classic with a Place in the Title for the Back to the Classics Challenge and for my UK Classic for the European Reading Challenge.
Posted by Karen K. at 6:14 PM