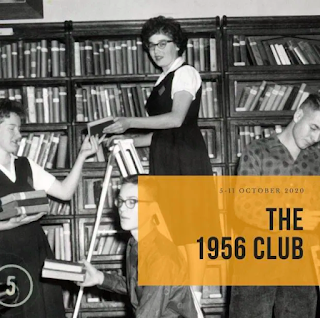 I've been reading a lot of P. G. Wodehouse lately and it occurred to me that it was very likely that he had published a book in 1956 that I could read for Simon and Kaggsy's 1956 Club! I depend on Wodehouse to cheer me up whenever I need a light read, and once again he came through with French Leave, a slight and amusing novel.
This one digresses from the normal Wodehouse setting of London or the English countryside -- it's mostly set along the French coast, in fictional resort towns of Picardy and Brittany. The characters are primarily American and French and I don't think there's even a single English character which is very unusual for Wodehouse.
But here's the setup. The book starts in America, on Long Island. The three Trent sisters, Kate, Jo and Teresa (known as Terry), are trying to make a go of a farm, selling eggs, milk, and honey, and having a pretty hard time of it. Conveniently, they have a windfall of $2000 each, and the two younger sisters, Jo and Terry, decide to risk it all on a trip to France, in search of millionaire husbands. Eldest sister Kate is aghast and is determined to go along as a chaperone. Jo and Terry will each pose as a wealthy American, with her sister playing her maid, for a month each. Jo goes first in Picardy but is unsuccessful and returns home; Terry continues to try her luck in St. Rocque. 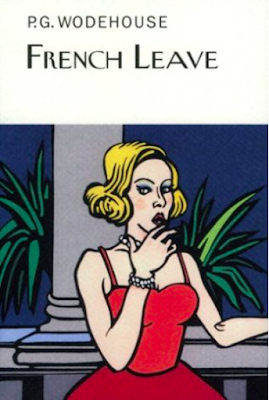 Terry does meet up with some genuine millionaires, but she also meets the slightly shady and very broke Nicolas Jules St. Xavier Auguste, the Marquis de Maufringneuse et Valerie Mauberanne, also known as Old Nick. Old Nick is an impoverished French nobleman who prefers living off wealthy wives (he's had at least three), questionable business deals, and his son Jefferson, from his first marriage to a wealthy American. Jeff mostly lived with his mother in America but fought with the maquis, the French resistance, and has a dashing scar on his face to show for it. He's now a struggling writer who refuses to marry for money but is willing to help his father out of a tight spot. In return, Old Nick decides to set up his son with the delightful Terry Trent, whom he believes is loaded with American cash.
Unfortunately this plot also includes spending time on a yacht with some other wealthy Americans, including Old Nick's second ex-wife Hermione Pegler, who believes that Terry is an adventuress (technically, she is) who will mess up her plans to marry off her niece Mavis. Mrs. Pegler wants to pair Mavis, a fizzy-water heiress, with Freddie Carpenter, another fizzy water millionaire (Mrs. Pegler owns considerable stock in both water companies, and hopes that a marriage between the two would be of financial and personal benefit). She thinks that Terry is after Fred's money, but Terry and Jeff are instantly smitten. The fact that neither of them has any money and assume the other one does leads to misunderstandings, tears, and a lot of physical comedic moments. This being a Wodehouse novel, everything comes right in the end. I can absolutely imagine adapted as a classic screwball comedy from the early 1950s. I recently watched Some Like it Hot and there are some elements that are similar -- wealthy Americans on yachts, husband-hunting, and characters climbing out of hotel windows.)
I enjoyed French Leave, though it isn't a classic Wodehouse -- I think I've read 17 books by him so far, and I wouldn't count it among his best. There are some characters that seem superfluous, and some definite loose ends that are never resolved. However, it's a fun, short novel, and can easily be finished a day or maybe even one sitting (it would be perfect for a vacation read) -- preferably in a resort town on the coast of France.
Thanks again to Simon and Kaggsy for hosting this event, can't wait to do it again next time!
Posted by Karen K. at 1:12 PM