1956 Club: Madame Solario by Gladys Huntington, and some book covers 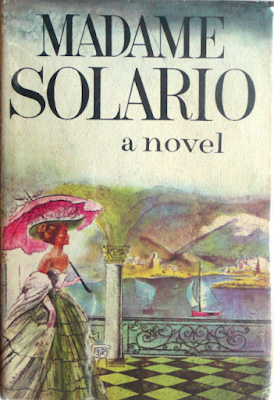 A first edition dust jacket.
Those bare shoulders seem more 1950s than Edwardian.
I was really ambitious for Simon and Kaggsy's recent #1956 Club -- I had a stack of books published that year that I was determined to read, mostly from my own shelves. I did finish four of the five, though I only had time to blog about two of them. I had also started another, a Persephone called Madame Solario. However, it was a bit of a slow read and 493 pages long, I knew I wouldn't finish it during the specified period. But I finally finished it last week and thought I'd review it anyway.
Published anonymously in 1956, Madame Solario is set in the fashionable resort town of Cadenabbia on Lake Como in northern Italy, in the summer of 1906. The book, which is divided into three parts, begins with the arrival of a young Englishman, Bernard Middleton, who is spending the summer on the continent before settling down in a banking career chosen for him by his family. He is supposed to meet friends who have been delayed, but decides to stay when he is drawn into the society of other expats vacationing in the same hotel. At first he is drawn to the beautiful young Ilona, whose heart is being broken by a Russian soldier, Kovanski. Bernard is disappointed by Ilona's sudden departure, but is soon enamored of the mysterious Madame Natalia Solario, a beautiful English woman with an absent husband. Her arrival turns the hotel into a bit of a turmoil. It seems there is some unfinished business with the jealously glowering Kovanski, and Bernard also learns of some scandals in Madame Solario's past.
Bernard begins a tentative friendship with Madame Solario, but the viewpoint of the book shifts in the second part with the arrival of Madame Solario's brother, Eugene Harden, who is apparently the source of the mystery in his sister's past. The hotel guests become suspicious of their close relationship, and rumors begin to spread. Bernard is hardly mentioned and it's very focused on Natalia (nicknamed "Nelly" by her brother) and Eugene. A lot of it is just mostly conversations between the two, or rather, just long rants by Eugene. The third part then shifts the focus back to Bernard and the pace really picks up before a very dramatic finish that left me gobsmacked.
According to the Persephone website, reviews of the novel compared to it Henry James crossed with Ivy Compton-Burnett or with Daphne du Maurier. I haven't tackled much by James but I am a fan of his contemporary Edith Wharton, and this feels a bit like a Wharton novel to me -- dissatisfied upper-crust people in Italian resorts are definitely an Edith Wharton setting, though the malevolent brother isn't typical of her work.
Those people . . . they have the superiority of owing their good fortune to something they themselves had nothing to do with. And that is the superiority I envy! To be born with a sort of super-self, for that's what rank is, a super-self that planes over frontiers -- to be born thinking one has the right to look down -- hasn't that got more charm than anything one can do for oneself? (pp 198-199)
I liked this book, though the middle section, the longest, dragged somewhat. I found the relationship between Natalia and her brother disturbing. I don't want to give anything away but after reading it I'm not surprised that the author was anonymous for a long time. And the ending was . . . wow. I really, really wish I knew someone else who had read this so I could discuss it with them. Not a typical Persephone at all, but definitely worth reading.
And lots of interesting book covers!

In 2012 Madame Solario was adapted into a French movie, currently available for streaming on Amazon Prime. I haven't watched it yet but I'm curious to know how they'll adapt this 500 page novel into a 90 minute film. I imagine just cutting out Eugene's tirades will save a lot of time. 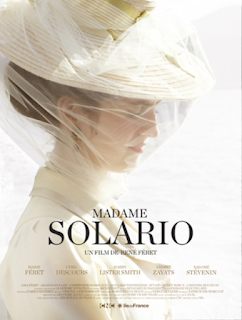 There was even an entire book published on the mystery of the anonymous author. Sadly it's only available in French. 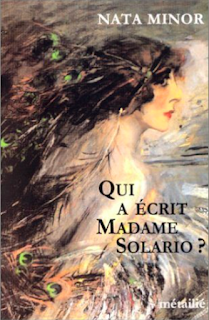 I'm counting this as my book set in Italy for the European Reading Challenge.
Posted by Karen K. at 6:51 AM