The World My Wilderness by Rose Macaulay 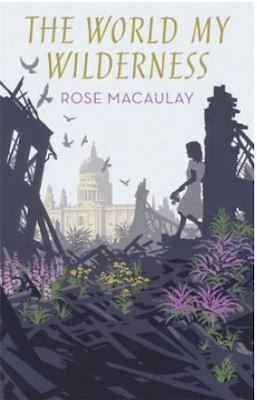 No civilization had lasted for more than a few thousand years; this present one, called western culture, had had its day and was due for wreckage, due for drowning, while the next struggled inchoate in the womb of the ensuing chaos, till slowly it would take shape and have its day. That day was unimaginable; it would be what would be; but already the margins of the present broke crumbling and dissolved before the invading chaos that pressed on.
Published in 1950, The World My Wilderness is Rose Macaulay's penultimate novel, just before her most famous work, The Towers of Trebizond. I'd been meaning to read this forever and was lucky enough to find a paperback Virago copy a couple of years ago, on the free book cart in the lobby of the Ramstein AFB library. I can spot a green Virago spine a mile away so naturally I snapped it up.
Just after the end of World War II, British expat Helen Michel is living in the south of France, in a small town near the Pyrenees, with her 17-year-old daughter Barbary, and her young son, child of her second marriage to a Frenchman. Her husband Maurice, suspected by many as being a collaborater, has died under mysterious circumstances, and Helen is living a quiet existence in their house, Fraises, when her oldest son arrives from Cambridge. After a visit, he returns to London, taking his sister back to live with their British father and his new wife. Also joining them on the trip is Barbary's stepbrother Michel, now orphaned, to live with his uncle. Fifteen-year-old Michel and Barbaray have been running rather wild with the Maquis, French resistors.
Not surprisingly, the move to London does not suit Barbary very well. Theoretically she's studying art but is also continuing to be rather wild, exploring the bombed-out buildings with Michel and making some rather disreputable friends. Her father, a British peer, attempts to 'civilize' her -- or rather, her new stepmother Pamela does -- but Barbary can't be bothered to put on makeup or look like a lady, much less sit in boring drawing rooms. Things take a turn for the worse when Barbary accompanies the family on a trip to Scotland to visit an uncle, a psychiatrist who would like very much to analyze her.
I liked this novel but for a short book, only about 250 pages, it was surprisingly slow. I expected to rush through it but it really isn't that sort of book. It's quite description-heavy and the characters are really well drawn. I was surprised that as early as 1950 an author recognized the psychological effect the war must have had on so many people, including the young, since I've always thought PTSD and wartime trauma was mostly ignored -- Barbary's British father and stepmother were clearly very stiff-upper-lip type of people.
Barbary in particular is a very interesting character, she's both old beyond her years and also extremely childlike. I was very worried that something terrible would happen to her wandering about bombed-out London buildings alone, (and it does) but not at all what I was expecting. I also think the name Barbary is a little heavy-handed but again, it was published in 1950 so maybe that was a subtle hint for its time.
I also quite liked the twist ending which I was not expecting at all. Overall, a very enjoyable book and an excellent summer read.
This is my sixth book for the TBR Pile Challenge.
Posted by Karen K. at 11:13 AM