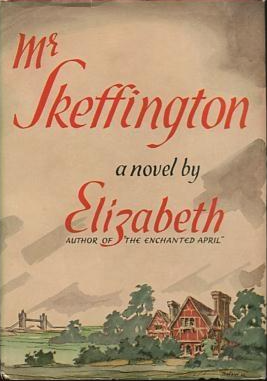 I found this book several years ago at an antique bookstore in Fredericksburg, TX, a very cute little town outside of San Antonio, full of boutiques and antique stores. Or maybe it was Boerne -- so many quaint places in the Hill Country, I can't keep them all straight. Anyway, I was pleased to find a first edition of a book by Elizabeth von Arnim, one of my favorite writers. Naturally it sat on the shelf for a good ten years before I finally decided to read it.
So. Published in 1940, the book begins with Lady Frances (Fanny) Skeffington, who is recovering from a serious illness. She's on the verge of her 50th birthday, and is basically going through a mid-life crisis. In her early twenties Fanny married a rich older man, Job Skeffington, to save her beloved brother's estate, but finally divorced him after his multiple affairs with office girls. She never remarried but for the last twenty years or so has had multiple romances with various men. Now nearing 50, her stunning beauty has faded and she begins to consider her past life and relationships; also, she keeps having visions of her ex-husband Job.
First Fanny consults unsuccessfully with a famous London specialist, whom she finds insulting; then, she decides to revisit all her past lovers, which becomes more and more embarrassing as she acknowledges that they were really all attracted to her by her stunning beauty -- another Helen of Troy, much like Lady Ruby MacLean in The Loved and Envied. Time and illness have stripped her of her looks and most of her past lovers and friends are shocked at her appearance.
Apparently this novel was much beloved and even adapted into a movie starring Bette Davis, but it isn't my favorite of von Arnim's novels. I found it really sad and kind of painful -- Fanny really needs to find validation from men, and she isn't getting it. (And most of her female friends were really pretty unpleasant). I don't know if it was supposed to be funny or if von Arnim was trying to make a point about women in the mid-century. This was her last novel and she herself had an unhappy first marriage, then an affair with writer H. G. Wells, and an unhappy second marriage. 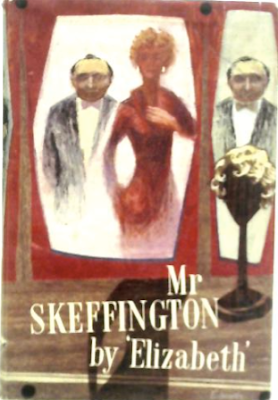 The other issue I had with this book was the anti-Semitism. Fanny's ex-husband Job is Jewish, and this is brought up multiple times in a rather uncomfortable way. (There's also another awful character who has recently returned from the South Pacific and is really racist, but he's clearly meant to be terrible).  Without giving away the ending, I will say that Fanny takes the high road, but I was really wondering how this would all pan out, especially with the backdrop of the War and Jews in Europe, which is finally acknowledged. So it all basically comes right in the end but the whole book was just kind of awkward and uncomfortable for me. I cannot imagine how this translates to a film, but it's available for rent on Amazon for only $3 so I might give it a try, though I honestly don't see Bette Davis as Fanny.

So, not among my favorites of her novels, but I still have three left on the shelves unread -- The Caravaners, Vera, and The Jasmine Farm. I'm really hoping I like those better.

I'm counting this as my Classic by a Woman Author for the Back to the Classics Challenge.

Labels: Back to the Classics 2022, Elizabeth von Arnim, middlebrow