Paris in July 2022: The Loved and Envied by Enid Bagnold 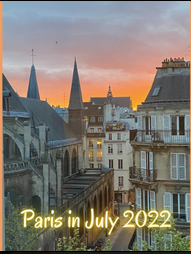 My fourth book for this years Paris in July is The Loved and Envied, a Virago reprint I've owned for several years (I can't even remember where I bought it -- it has the price in USD). Originally published in 1951, it's a novel for adults by Enid Bagnold, most famous for her children's book National Velvet (which I've never seen nor read).
Inspired by the life of Lady Diana Cooper, it's the story of aristocratic families living in Paris after WWII. Though their titles are French, some of the characters are actually British. Most of the action is centered around the beautiful and charismatic Lady Ruby Maclean. Now in her mid-fifties, she's has been happily married to Sir Gynt Maclean for many years, but has always had a large circle of admiring men who find her irresistible -- Sir Gynt first saw her while walking down the street and instantly fell in love with her at first sight. She's basically Helen of Troy and men will do anything for her, much to the chagrin of her only daughter Miranda, who has always been overshadowed by her mother.
Also in the Macleans social circle is Edouard, the elderlyVicomte de Bas-Pouilly and his mistress Rose; Alberti, the Duca de Roccafergolo, who rents a cottage on the Vicomte's estate; Rudi Holbein, a famous playwright; and his ex-wife Cora, an artist and great friend of Lady Ruby.
The story begins the opening night of Rudi's latest play, with most of the characters in attendance, and what follows over the next few weeks. It's another book in which not much happens, yet many things happen, largely character driven. Most of the characters are aging aristocrats and much of the story concerns aging and mortality, particularly the question of aging beauty. Lady Ruby is 53 and still all the men hover around her, even those young enough to be her sons.

The story jumps around quite a bit at the beginning giving back story to all the characters surrounding Lady Ruby and their relationships to her. The first half was almost like a set of short stories about them before they actually got to the main character. Honestly, I don't even remember much about her except the many descriptions of how beautiful she is and was, and that got a little tiresome. It's well written and I liked a lot of the characters, but I found everyone besides Lady Ruby to be far more interesting than she was and would have loved to read more about them and less about her. I particularly liked the back story of Cora Holbein and would happily have read an entire novel about her.
One thing I didn't particularly like was (yet again) some of the persistent racism and some homophobia. Ruby's daughter Miranda is living in Jamaica for part of the book and there are some unfortunate slurs. There's more than one gay character and at first I thought the book was surprisingly progressive, then another gay character showed up at the end and yikes some of it was pretty cringe-worthy. I suppose I shouldn't be surprised since it was published in the 1950s but I still hate it.
Though nearly all the story takes place in France, many of the characters are British so it doesn't feel especially French. It was an interesting look at aristocrats of the period but it isn't one of the best Viragos I've read so far.
This is my eighth book completed for the TBR Pile Challenge.
Posted by Karen K. at 12:34 PM