Paris In July: Renoir, My Father by Jean Renoir 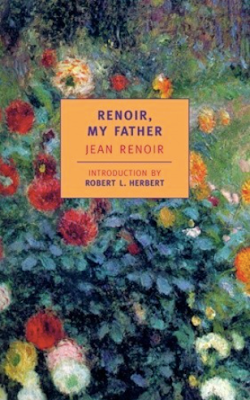 I am extremely pleased with myself for finally finishing this book! I bought it more than ten years ago on a visit to the Frick Museum in New York City, when I went to see an exhibit of Dutch masters. Apparently they didn't have anything else in the gift shop and but the pretty cover of this NYRB classic (it's a detail from Garden at the Rue Cortot, Montmartre painted in 1876, below. It's at the Carnegie Museum in Pittsburgh). 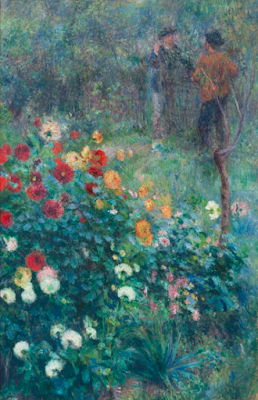 So. I've owned this book forever and I know I've put it on my list of books to read for Paris in July multiple times. I finally cracked it open a couple of weeks ago and though it's not a fast read, I really enjoyed it. I love art and I'm fascinated by the lives of artists. I wouldn't say Renoir is my favorite Impressionist but I really gained a new appreciation of his work from reading this book.
Originally published in 1958, it's a memoir by filmmaker Jean Renoir, Auguste Renoir's middle son. Jean was wounded during WWI and as he convalesced with his elderly father, who was already crippled with rheumatism, the younger Renoir spent a lot of time talking to his father about the artist's life. The book is a combination of a biography of his father's life and his own recollections growing up in Paris and various other parts of France. The family often spent summers in the countryside in various parts of France, particularly Essoys in Burgundy, where his mother Aline was born, and later in the south of France, near Nice (I was actually lucky enough to visit Nice a few years ago and was sadly unaware that there's a Renoir museum just 20 minutes away in Cagnes-sur-Mer, in his final home. I did get to visit the Chagall Museum and the Matisse Museum, so I really wouldn't complain but I wish I'd known!) 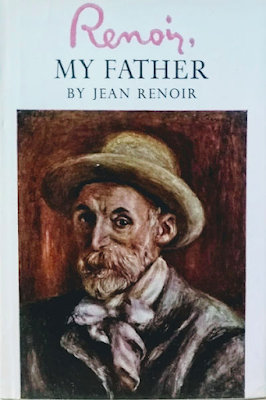 It's quite an interesting memoir about Renoir's life and how became and artist and met up with his fellow Impressionists. He's one of the most prolific of the group, with at least 4000 paintings to his record (and the book includes stories about other paintings that were lost or stolen which just made me aghast. Some were literally used to patch up holes in a leaky roof).
There are also great stories about the other painters including one about his good friend Gustave Caillebotte, who named Renoir executor of his estate and personal art collection after his death. Apparently it was Caillebotte's wish that the collection be given to the Louvre who didn't want the whole collection and turned 2/3 of it away. The third that they kept was stored away in the Luxembourg Museum. After his widow's death they just went to various heirs and were mostly sold outside France. Well, France's loss is the world's gain, I suppose!
I feel very fortunate to have been to Philadelphia last year where I saw the biggest single collection of Renoir's works at the Barnes Foundation, a total of 181! Barnes was a huge art collector and began amassing Impressionist works in the 1920s. His entire house was designed to showcase his collection and was eventually left to the city of Philadelphia as a private museum. The collection was eventually moved to a larger space in downtown Philadelphia which resembles the original house with the exact layout of the all the artworks. If you ever get the chance it's absolutely worth visiting!
I'm also extremely fortunate to live only a short drive away from the Phillips Collection Museum in DC near Dupont Circle. One of the highlights of the collection is Renoir's Luncheon of the Boating Party. The last time I visited one of the docents told me that Phillips and Barnes were rival collectors. Phillips was annoyed that Barnes had the bigger collection of Renoirs but always bragged that he had the best one.
I enjoyed visiting Renoir's world but the book is pretty dense and took a lot longer to finish than I expected -- I am rather behind on Paris in July reading list and also my Big Book Summer Reading Challenge! But this book was on both lists and I'm also counting this as my Classic Nonfiction for the Back to the Classics Challenge.
Posted by Karen K. at 2:28 PM