The Face of a Stranger by Anne Perry 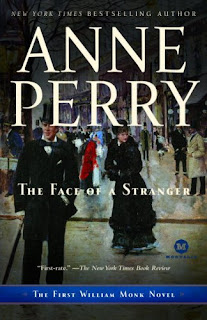 How did it take me so long to read Anne Perry????

To Didi and Sherrie, my librarian friends:  I thank you, and silently curse you.  But in the nicest possible way, because now I am completely hooked on Anne Perry.

I was looking for a good neo-Victorian mystery when Perry's Inspector Monk series was recommended.  The Face of a Stranger  is the first in the series, and it grabbed me right away.  Circa 1860, a mysterious, anonymous man awakens in pain in a terrible place -- a jail? The workhouse?  It turns out he is in a horrible Victorian hospital, and he does not know his own name, nor how he came to be there.  It turns out he has been there three weeks after his carriage overturned, but he has no memory of the accident or anything about himself.  He does have one visitor -- a police detective named Runcorn, who tells the man his name is William Monk, and that before the accident he was also a police detective.

Poor Mr. Monk slowly recovers but cannot recall any of his memory.  However, he must attempt to continue working as a policeman despite his loss, since he has no other resources.  He returns to work and is given a case -- the brutal murder of a gentleman named Joscelin Grey, who was beaten to death in his apartment.  Mr. Grey, a veteran of the Crimean war, was the third son of a wealthy family.   While trying to determine the facts of his own life, Monk also encounters a tragic beauty, and it appears that before his accident, he was attempting to solve a mystery for her as well.  Inspector Monk must try to solve both case while trying to make sense of his own life and history, without revealing to anyone that he is practically amnesiac.

Perry does a great job of bringing the characters and the Victorian era to life.  Not only does this book include three potential mysteries, Perry makes a lot of points about the British class system and snobbery -- the aristocrats are extremely rude and condescending to the police -- plus the roles of women, while including background about the Crimean War, about which I knew nothing, but if you're interested, click here.  Apparently, the Crimean War was a battle between the west and Russia over control of the Middle East .  It sounds even worse than the wars going on right now, with terrible medical conditions.  According to Wikipedia, about 5,000 British soldiers died as result of wounds and in action, and another 16,000 died of diseases.  This book was written in 1990, but it's surprisingly relevant if you think about it.

Anyhow, besides a cracking good mystery -- I had a few ideas, but there are some pretty good twists and turns before the murder is revealed.  Perry does tend to repeat some points -- I get it, the Crimea was terrible, the aristocrats had no idea what the rest of the world was going through, and women were treated like crap back then.  However, I still really enjoyed this book and I'm looking forward to the next book in the series.  Of which there are sixteen at present.

I have a love/hate thing with series mysteries.  They are dangerous, ruinous to one's reading list.  I'm just a girl who can't say no -- when I find a mystery writer I love, I will get completely obsessed and read the entire series.  It's like a bag of Ruffles, you can't eat just one.  In my youth, I read all of Agatha Christie; later, I moved on to Ruth Rendell (including the Barbara Vine novels, still my favorite); the late, great Dick Francis, may he rest in peace; P. D. James, Peter Lovesey. . . I just noticed they're all British.

Anyway, now that I am all into Anne Perry I will have to read the entire Monk series, plus the Christmas novellas (well, maybe I'll save those for December).  And the Pitt series. . . oh, this is bad news.  I have just added another fortysome books to my to-read list.  I just know I'll never read them all before I die.  Sigh. Well, to quote Borges, "I have always imagined Paradise to be a kind of library."  Let's hope they have a good selection of mysteries.

I read this book as part of Our Mutual Read challenge.
Posted by Karen K. at 7:12 AM