The Suspicions of Mr. Whicher: Murder and the Undoing of a Great Victorian Detective by Kate Summerscale 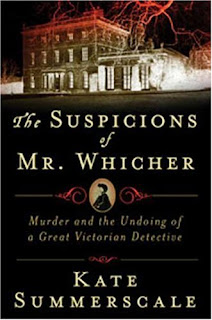 If you have any interest at all in Victorian sensational or detective fiction, or in the neo-Victorian detective fiction, this book will probably interest you as much as it did me.  Mr. Whicher gives great insight into the Victorian frenzied fascination with crimes and detection.  Summerscale shows the influences of this case, as well as other Victorian true crimes, on such famous novelists as Charles Dickens, Wilkie Collins, Henry James, and Sir Arthur Conan Doyle.

This book explores a sensational case that mesmerized the British public in 1860. The real-life detective, Mr. Whicher, was the inspiration for several fictional detectives, including one my personal favorites, Inspector Bucket in Charles Dickens' Bleak House. As I read the book, I couldn't help but picture Mr. Whicher looking exactly like Alun Armstrong, the actor who portrayed Inspector Bucket so perfectly in the 2005 BBC adaptation.

In the early hours of June 29, 1860, a terrible crime occurred in the town of Road, Wiltshire County.  After the entire household was shut up tight,  Francis Saville Kent, not quite four years old, was taken from his bed while still asleep in the dead of night and brutally murdered.  His absence was discovered the following morning and not long afterward his small body was found in the servants' privy. 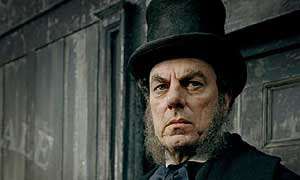 Since the house was completely secured, suspicion fell on the members of the household. That night the residents were: Mr. Kent, his second wife Mary, who was eight months pregnant; three servants, and the children: four children ages fifteen to twenty from his first marriage; and three small children from the second marriage.  In particular, suspicions focused on three people:  the nursemaid, Elizabeth Gough, who slept in the nursery with two of the children, including young Saville, the victim; Constance Kent, 16, from Mr. Kent's first marriage; and Mr. Kent himself.

After several days of investigations by the local police, the media had caused such an uproar that the entire country was riveted on the case, and a Scotland Yard detective was called in: Mr. Whicher.  This case became a media circus.  If you think the paparazzi and the media are bad now, it was just as awful 150 years ago.  This case tore the family apart, exposing all their quirks, and secrets.  The case revealed some oddities; first, that the late Mrs. Kent had been considered mentally ill before her deat; that the second Mrs. Kent had been the family governmess, who was in control of the household while the first Mrs. Kent was ill; that the oldest Kent children, from the first marriage, lived on the third floor, on the same level as the servants.  This raised some very interesting questions -- had Mr. Kent had an affair with the governess while the first wife was alive?  Was the first Mrs. Kent truly mentally ill, or were Mr. Kent and the governess simply trying to get her out of the way?  Were the older children badly treated by their stepmother?  And was Mr. Kent having an affair with the nursemaid?  The speculation by the media, the public, and the police were overwhelming and went on for years until the mystery was finally solved.

This book is both well-written and well-researched.  Summerscale pored over original documents, and the book includes diagrams, illustrations, and photos of the family and the house -- and an extremely useful note on currency conversions.  It's both fascinating and creepy.  I've read a lot of mysteries, but hardly any true crime.  The Suspicions of Mr. Whicher also explores the Victorian fascination with detectives and fantastic popularity of detective fiction and sensational novels.  If you've read Bleak House, The Moonstone, or The Turn of the Screw, you may recognize elements from this case.  It also inspired many other "locked house" and "country estate" murder mysteries.  The creepy part is that it's all true.

This book counts as my first book in the Our Mutual Read Challenge.  This blog entry is also posted at Our Mutual Read.
Posted by Karen K. at 9:25 AM