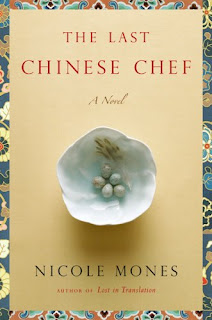 I really did want to like this book.  It's about food -- a food writer! Traveling to China!  I thought this book would be exactly the thing I would love. First of all, I actually did have a paying job as a food writer, so I know a little bit about it.  I've also been to culinary school (though, I admit, it was no CIA or Cordon Bleu; it was part of the city colleges in Chicago; nevertheless, I finished it and have a certificate.)  And I did actually get paid to work in several professional kitchens.   Plus, I've been lucky enough to visit China, both Beijing and Hong Kong.  So I was pretty interested in this book, and even suggested it to my library's book discussion group.

Unfortunately, I am pretty ambivalent about it.  Here's the set up: Maggie, a forty-year-old food writer, is grieving over the loss of her husband, who died suddenly in an accident.  She gets the shock of her life when one of her husband's colleagues calls from China, with some upsetting news:  apparently her husband, who visited China frequently for work, had an affair with a Chinese woman, who has now named her late husband in a paternity suit!  She only has a few weeks before the Chinese courts will rule, so she has to move fast to find out if there's any truth to it.

Maggie calls her editor and explains that she will need some time off for this trip.  No problem, says her boss, who then offers her a great assignment:  interview a Chinese-American chef who has moved to Beijing to open a fantastic, Imperial-style Chinese restaurant. The chef, Sam Liang, comes from a long line of chefs -- his grandfather wrote a well-respected book on Chinese cooking, which he is attempting to translate into English.  Maggie agrees.  Turns out the restaurant has hit a snag, but said chef is about to enter a cooking competition, sort of the Olympics of Chinese cuisine.  He agrees to be interviewed about the competition instead.

So, we then have two intertwining stories: Maggie dealing with the knowledge that her beloved husband may have had a secret life, and this child who may or may not be his; and chef Sam, who is struggling with his Chinese family, including his estranged fatherl about his cooking style, his family history, and the competition. Of course, since they are both single, attractive, damaged adults, a romance is also involved -- will they or won't they?

As much as I wanted to love this book, I just couldn't.  First of all, it's short, only 288 pages, and it's also one of those hardbacks that are on the small side, which I think is the publisher's sneaky way of making the book look longer than it is.  Not that there's anything wrong with short books, but somehow this book seemed unfinished to me.  There's a lot going on in this story which could have been really interesting, but there are quite a few threads in this book that sort of went nowhere, or seemed unresolved.  Also, some characters were introduced that seemed unnecessary to the plot, and their presence seemed sort of forced and unnatural to the story.   And after reading the book, I still didn't feel like Maggie's character was that well developed.  I would have liked to learn more about her back story -- and Sam's, too, for that matter.  We know he grew up in America, his mother was Jewish, he hasn't been lucky in love, etc., but not much else.  It seemed to cut right to his time in China as though he suddenly appeared there.

There is a ton of great food writing in this book, which is one of its strong points.  If you have any desire to read about authentic Chinese cuisine, and the history of Chinese cooking, or what happened to all the fantastic chefs during the cultural revolution -- this book is great.  However, there were some aspects about the cooking that I found unrealistic.  This guy, a foreigner, has only been cooking Chinese food for four years and is now ready for this major competition?  The book points out how he slaved at his uncles' restaurants, but it also constantly points out how intricate and complex the food and cooking styles are -- it seems to me that's something that takes decades to learn, not something that you pick up that quickly.  And he only has a week to prepare for this dinner -- he spends an AWFUL lot of time chatting with this writer for someone so busy.    I did actually work in several kitchens during high-volume and high-pressure situations, and I honestly don't see a chef wanting to be interviewed when he's under so much stress.

Also, though Maggie has been a food writer for years, she can't cook.  At all.  Can't even boil water.  This to me was the MOST unbelievable thing about this book.  Now, I'm not saying that all food writers should be gourmets, or have worked in kitchens, or gone to school, but seriously, if you are a food writer, you are writing and thinking about food an awful lot of the time, which indicates that you are really, really, into it.  I find it extremely hard to believe that someone who has making a living as a food writer, who needs to write about chefs, techniques, ingredients, has observed -- as she keeps reminding us how writers are good observers -- and she can't even make a salad or roast a chicken?

Maybe I am just nitpicky.  I do know that Nicole Mones IS a food writer -- she wrote for Gourmet, and you can't get much more prestigious than that -- and lived in China, so she has the background and she knows what she's talking about.  I did love all the food writing,  and the history -- she gives some back story on Sam's father about why he refuses to cook or return to China, which is just fascinating.  Opulent cuisine was not appreciated during the cultural revolution, to put it mildly.  I would have loved an entire book about him and his story.

The descriptions of the food and cooking are just fantastic, and make me want to go back to China -- I'll admit many of the restaurants I visited were probably not as authentic as those in the book.  (Mones thoughtfully provides recipes and restaurant recommendations on her website.)  If you are interested in China, or fascinated by food, you might enjoy this book. I just wish the plot and character development were as delicious as the cuisine in this book.