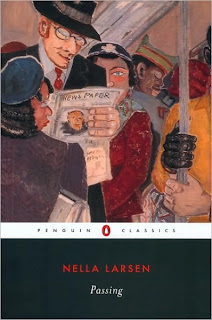 Welcome to the second week of the Harlem Renaissance on the Classics Circuit!  Today's review is Nella Larsen's Passing.  Set in the late 1920s, it's the story of a young upper-class woman, Irene and her childhood friend Clare.  Both are light-skinned African American women, both can pass for white.  The protagonist, Irene, does so when it's convenient for her -- for example, to enjoy the luxuries of a  whites-only restaurant or hotel.
The story begins on a hot, sultry day in Chicago.  Irene, who is happily married to a successful African-American doctor, lives in New York and is visiting her.  While enjoying an iced tea on rooftop cafe, she notices a beautiful white woman staring at her.  At first, she's concerned that the woman knows she's "passing" at the whites-only restaurant, but then she realizes that it's her childhood friend Clare.  Clare is not only also passing for white, but has completely adopted a white identity, going so far as to marry a white man who is a complete and utter bigot -- and a wealthy, international businessman.  Clare is enjoying the benefits of an upscale lifestyle, but after her chance meeting with Irene, Clare finds she is drawn more and more to her own race.  Despite the risks, she continues to spend more time with Irene's African-American community  in Harlem, disrupting her own life and Irene's as well.
Nella Larsen knew the subject material well.  She was the child of a mixed marriage -- her mother was Danish and her father from the Danish Virgin Islands -- though from what I've read she couldn't or didn't try to pass for white.  She was born in 1891 and attended historically black schools including the Tuskeegee Institute and a black nursing school.  After nursing school she became a librarian and worked at the New York Public Library in Harlem.  She began writing during the Harlem Renaissance in the 1920s, but after her marriage failed and she was accused of plagiarism, she stopped writing and died in relative obscurity.
I'd like to say I enjoyed this book, but more than anything, I found it to be distrubing and sad.  I simply cannot imagine the awfulness of having to hide such an important piece of your identity, to spend your life living a lie.  And this isn't the first time I've heard about racism within races, but it's still unsettling to read about it.
Here's a short quote from the novel:
She said: "It's funny about 'passing.'  We disapprove of it and at the same time condone it. It excites our contempt and yet we rather admire it.  We shy away from it with an odd kind of revulsion, but we protect it."
I actually thought that this book would focus primarily on the racism issue, but a lot of time is spent on the relationshiop between Clare and Irene -- Clare pretends to be Irene's friend, but she's really just worming her way into Irene's life and she can't get rid of her.  I think this aspect of the novella is really universal, and most people could relate to that.  This book is really short, just about 100 pages, so it's a quick read. But there's a lot packed in here, about race, identity, loyalty, relationships, jealousy. This would be a great book for a discussion group -- I really wish I had someone to discuss this with, especially the ending.  I know other upcoming reviewers will be discussing this book, and Larsen's other works, so I look forward to reading them and seeing other opinions.
Posted by Karen K. at 9:00 AM