A Night in the Cemetery: And Other Stories of Crime and Suspense by Anton Chekhov 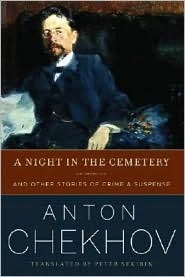 So many of the lists of "best" and "must read"books include Russians.  Sadly, my knowledge of Russian literature is pretty limited.  I'm generally pretty intimidated by Russian classics.  But I really did want to participate in this month's Classic Circuit.  Chekhov was the perfect solution -- an easy introduction to Russian lit for the intimidated.  Though he's best known for his plays, he was a master of the short story.  There are many different collections available, and I finally settled on A Night in the Cemetery: And Other Stories of Crime and Suspense, a collection of some of Chekhov's earliest stories.  As the title suggests, each of the 42 stories somehow relates to a mystery, crime, or death.

Though some of the stories are tragic, many of them are funny, or have ironic twists, a bit like Saki or Roald Dahl, but mostly less macabre.  Several of the tales had characters who were doctors or medical people, or the coroner, which makes sense if you remember that Chekhov began writing while in medical school.  He was so successful he paid for school with his earnings, and was able to support his family as well.  According to the introduction, many of these tales have rarely or never been translated into English.  These are some of his earliest stories, and some of them were published under pseudonyms.

A few of the stories are available in other collections.  Since I was waffling at first and couldn't decide which volume of stories to read, I also began reading Forty Stories, which was translated in 1963 by Robert Payne, who also wrote the volume's introduction.  (The introduction itself is great reading if you're interested in Russian writers, and now I have to finish that collection as well.)  Anyhow, both of the collections include "Death of a Government Clerk," so I was able to compare the translations.    Here's the first paragraph from the version in A Night at the Cemetery, which is translated in this volume as Death of an Office Worker:


One wonderful evening, an office gofer, Mr. Ivan Dmitrievich Worm, sat in the second row of a theater, watching the play Bells of Cornville.  He watched the play and felt himself at the height of bliss.  But suddenly. . . . Many stories have that phrase, "but suddenly."  Authors are right: life is filled with unexpected turns of events.  But suddenly, he scowled, rolled his eyes upward, stopped breathing for a while, averted his gaze from his binoculars, bent his body, and, and then, "Achoo!" he sneezed, as you see. 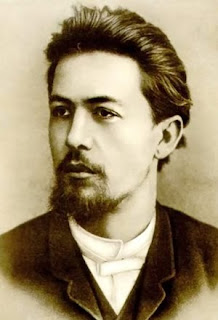 Now, here's the other version, from the Payne translation:

On a beautiful night the no less beautiful government clerk Ivan Dmitrich Chervyakov [a footnote explains Chervyakov means "worm"] sat in the second row of the stalls watching Les Cloches de Corneville through opera glasses.  He was watching the stage and thinking himself the most blessed among mortals when suddenly. . . (Very often in stories you come upon this word "suddenly," and all this is very proper, since authors must always concern themselves with the unexpectedness of life.)  Suddenly, then, his face puckered up, he rolled his eyes, his breathing stopped, the opera glasses fell from his eyes, he collapsed into his seat, and . . . at-choo!  As the reader has observed, he sneezed.


I freely admit I am no expert on Russian literature, and the only words in the Russian language I know are "nyet" and "glasnost."  But I find the second translation much more beautiful and interesting -- to me it seems like something someone would have actually said back in the 19th century.  Also, I occasionally found the translation a little jarring.  Some of the stories in this collection include modern vernacular English such as "wow" and "guys," and so on, which I found incongruous to the stories, since they were all published in the 1880s or 1890s.  Chekhov sometimes gave his characters names which were comical or unflattering, such as Mr. Worm or Inspector Schmuck, and in this translator changed them to English.  I would have preferred the original Russian names with a footnote, since it seemed so anachronistic.  And I'm pretty sure that 19th century Russians were not nicknamed Mike or Tim, which also appeared in one of the stories.   I understand the translator may have been trying to make it more accessible, but I just found it distracting.

And I was very annoyed to realize that the final story, The Drama at the Hunt, is actually a very abridged version of The Shooting Party, which was one of my other choices for this posting! AFTER I'd finished it, so I know how it ends!!  And it's abridged from 180 pages TO FORTY.   Now, I am the first to admit that some of the Russians could use some editing (Anna Karenina springs to mind) but seriously,  to cut out two thirds of the book?  I found that irritating.

But I can't blame my irritation on Chekhov, just the editor and publisher.  My advice:  if you're interested in Russian lit, but you're intimidated by the sheer volume of some of the works, I do recommend Chekhov's stories.  This is a pretty good introduction, though it contains hardly any of his most famous works.  However, skip the last story if you have even the slightest interest in reading The Shooting Party, or it will completely be spoiled for you.
Posted by Karen K. at 9:55 AM