The Tortoise and the Hare by Elizabeth Jenkins 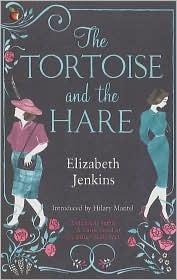 This is the very last library book I'm reviewing before I really get into my TBR dare -- I know, I was supposed to have finished all of them before January 1, but I did start it last year and I had to take a break and finish all of my book group selections last week.  And it was an Inter-Library Loan so I wouldn't be able to renew it.

Anyway.  This is exactly the sort of book I'm into at the moment, domestic fiction in the early 20th century.  But it wasn't AT ALL what I was expecting -- I thought it would be light and charming, sort of like Nightingale Wood or Miss Buncle.  It wasn't exactly light, and I wouldn't call it charming, though it was a good, thought-provoking book.  I'm not sure if I really liked it, but it's really sticking with me.  I guess that makes it a good book.

That probably makes no sense, so here is the synopsis:  Set in the early 1950s Imogen and her husband, Evelyn, have been married for about 15 years.  She's in her late 30s and he's older, in his early 50s, and he's a very successful lawyer with a London practice, though they're currently living in the country with their son Gavin, who's about ten.  Imogen is lovely and charming and not particularly deep, and her husband seems kind of overbearing.  Lately, Evelyn, the husband, has been spending a lot of time with their neighbor, Blanche Silcox, a wealthy, somewhat dowdy country spinster.  Evelyn seems to be increasingly under the influence of Blanche, though the idea that Evelyn could be cheating on his beautiful wife seems at first ridiculous.  Or is it?

The novel takes Imogen's point of view, and I can't say that I really liked her -- she needed to grow up and develop a backbone.  I ended up taking a break from this book due to my book discussion groups, and I wasn't sorry to leave it for a week or so -- I was so frustrated with Imogen's passivity that I wanted to shake her or at least throw the book across the room (which I would never do because I'm a librarian and it wasn't my book.  I don't want to annoy the ILL people!)   However, after finishing it and reading the afterword, I think this was the point of the book -- Evelyn married Imogen because she was passive and pretty, the perfect woman of the 1950s.

This book has some great writing, and Jenkins really does draw the characters well -- there are some bourgeois neighbors that are really hilarious, they're so awful.  This book made me really think about relationships and the role of women in the 1950s.  I suppose it was better than in the Victorian era, but really not that much!

If anyone else has reviewed or read this book, please let me know because I'd love to hear your thoughts.  The Tortoise and the Hare would be great for a discussion group but naturally my library doesn't have a single copy.  If you're looking for an interesting book for the upcoming Virago Reading Week, I highly recommend this book.
Posted by Karen K. at 11:13 AM