At Home: A Short History of Private Life by Bill Bryson 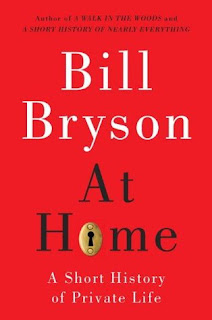 Well, this is a digression from the TBR Dare -- a library book!  (gasp!).  I am allowing, it, however, because I put it on hold at the library months before the end of the year, and there was a long waiting list -- in effect, this was grandfathered in.  It even delayed my participation in Virago Reading week!  But it was really worth it.

At Home: A Short History of Private Life is a bit hard to describe.  Several years ago, Bryson and his family returned to England and purchased a home built in 1851, a former rectory.  This got him thinking about everyday life.  He used the template of his house as the template of the book -- it's divided into chapters named after every room in his house:  "The Hallway," "The Kitchen," "The Scullery," and so on.  Theoretically, each chapter is focused on that topic.  However, if you've read Bill Bryson, you understand how his books are not always what they seem.

On the surface, this is a book about the history of houses and domestic life -- the things that everyone encounters in their daily life, the mundane, the ordinary.  Why do we put salt and pepper on the table?  What kind of toilets did people have 200 years ago?  Why do we say 'make the bed'?  And so on, et cetera.  But this book is more than that.  Bill Bryson digresses.  He meanders.  He makes lateral moves that somehow, eventually, circle back to the original topic.  So, yes, this is a book about the history of the everyday, but it's so much more than that.

If you read this book, you'll learn an awful lot about the daily workings of Victorian life -- servants, food, childcare -- but you'll learn a lot of other little interesting factoids as well.  Bryson manages to weave in the history of houses and the discovery of ancient British settlements that predate Stonehenge; Thomas Edison (and the fact that he technically didn't invent the lightbulb); Darwin's theories of evolution; Thomas Jefferson's Monticello and Washington's Mount Vernon; and a lot more information about bedbugs and mites that I personally couldn't bear to read (sorry, I was too grossed out and skipped parts of that chapter).

I found this book both engrossing and overwhelming -- there were so many facts that mind was sometimes reeling, yet I didn't want to put the book down.  I've been reading a lot of Victorian literature the past few years, and this book gives a lot of background that I found fascinating.  It gave real insight into all the changes that took place in the 19th century -- it started out with candles and carriages and ended up with cars, electricity, and the theory of evolution.  It must have been an amazing time to be alive.

If this sounds like a lot to absorb -- and there's 450 page of it, not including endnotes -- yes, it is, but Bryson makes it so fascinating, you won't want to put it down.  I rarely purchase hardcover books, but I think I really need my own copy of this -- there is so much of it I want to refer back to again and again.  And it's funny!  I found myself laughing out loud several times, and quoting facts to my family.  And it's extremely insightful.  Here's one of my favorite paragraphs, from the chapter "The Nursery," in which Bryson discusses the childhood of both poor and wealth Victorians:


. . . . it would seem that Victorians didn't so much invent childhood as disinvent it.  In fact, however, it was more complicated than that.  By withholding affection to children when they were young, but also then endeavoring to control their behavior well into adulthood, Victorians were in the very odd position of simultaneously trying to suppress childhood and make it last forever.  It is perhaps little wonder that the end of Victorianism almost exactly coincided with the invention of psychoanalysis.

So there you have it.  If you're looking for something fascinating, fact-filled, and funny, I highly recommend this book.  It's only January and I know this will be one of my favorite reads this year.
Posted by Karen K. at 10:25 AM