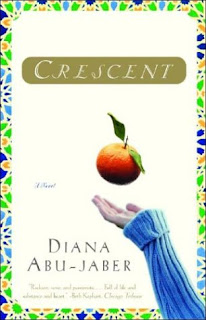 Crescent is one of the many books that have been filling up my TBR shelf for years, staring at me every time I walk by with a library book. I finally picked this one up since it's on the pile of the books I've owned the longest -- more than six years of being schlepped from house to house.

I think the fact that I've owned this book for so long, I really, really wanted it to be good.  I read more than 100 pages and I just wasn't in love with it, but I still forced myself to finish it.  I hate to admit defeat.  And yet, if I finish a book I didn't like, I get really annoyed with myself for wasting the time on it. I am at best ambivalent about this book.  I'm not sorry I read it, but I can't say I recommend it either.

This is the story of Sirine, a 39-year-old chef who has never found true love.  She is blond and beautiful and half Iraqi, and her parents died when she was 10, leaving her to be raised by her Iraqi uncle.  She doesn't know much about her heritage except through her cooking, which is wonderful.  Many men flock to her because of her looks and culinary talent, but she drifts from man to man.  In Crescent, Sirine may find true love with Hanif, a mysterious Iraqi scholar and friend of her uncle.  There are other men in the story, including the flirtatious Aziz, a renowned poet; and Nathan, a photographer with a lot of emotional baggage.

I think the problem with this book is that it may have been overly ambitious -- just too many elements that didn't seem to come together at the end.  There's the love story between Sirine and Hanif; the big mystery about Hanif's past; Nathan's erratic behavior; Sirine's quest to learn more about her Iraqi roots; et cetera, et cetera.  Plus, lots of descriptions of food, since Sirine is an amazing chef.  And did I mention every chapter begins with an excerpt of a tale told to Sirine by her uncle?  There's a lot going on here, probably too much.  For me, the book lost focus.

The biggest flaw I found in the book were the characters -- honestly, they just weren't all that interesting.  Sirine, the heroine, is 39, a fabulous cook, and beautiful.  That's pretty much all I can say about her.  Oh, and she still lives with her uncle, which is weird since she's nearly 40, and of course, because she is so stunning, many men fall in love with her, but she doesn't seem to get attached to any of them.  Her parents died when she was young so I guess that is the reason why.  Plus, there were some plot elements that were quite obvious and contrived, and the ending seemed tacked on.

Maybe beautiful characters don't really need that much development or back story.  But seriously, umpteen descriptions of her beautiful blond curly hair are not a substitute for character development.  Within the first couple of chapters, Sirine has multiple men falling all over themselves to be with her, often at the same time.  Frankly, this bores me.  I'd much rather read about flawed, well-rounded characters that aren't so pretty.

There were a few elements of this book that I did like.  The writing is pretty good, and I did rather like the recurring story told by Sirine's uncle.  That was the most interesting thing in the book, and I wish the author had just stuck to that.
Posted by Karen K. at 9:54 AM