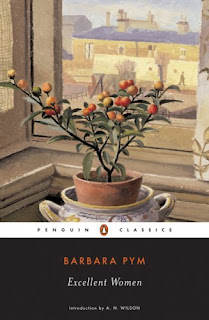 You know what I just love about reading?  When you find a book and you get so into it that you can't stop reading it, and it's just as wonderful as you hoped -- and then, you find out that this author has written a whole bunch of other books.  And then you want to rush to the library or the bookstore or online and order all of them, right now!

Well, that's how I felt about Excellent Women by Barbara Pym.  It was short and charming and I loved the main character, and it really made me think.  It's British domestic fiction, but it's not at all cutesy or twee.  Why did I wait so long to read this book?  I bought it more than two years ago, and though I didn't finish it in time for Virago Reading Week, I'm so glad it was a the top of my TBR list.

But now that I've been babbling, I suppose a brief description would be an order.  So.  Set in in London in the 1950s, Mildred Lathbury is a thirtysomething spinster, a clergyman's daughter and "excellent woman" who spends a lot of time volunteering at the local vicarage and generally doing good works.  She lives alone in a small flat, in what seems to be the verge of genteel poverty -- she only works part-time and doesn't seem to get much to eat.  Mildred's life gets shaken up when some new people move into her building, a young couple called the Napiers.  The wife Helena is an anthropologist and her husband arrives later, a rather dashing young naval officer who'd been posted in Italy.  Mildred gets slowly sucked into their somewhat tumultuous marriage, sort of acting as a go-between.

Mildred's other best friends are the Malorys: Julian, the parish vicar (whom, it is generally believed, is a perfect match for Mildred) and his sister, Winifred, who lives at the parish and keeps house for them.  Winifred and Julian decide to convert their attic into a flat to let, and things get interesting when an attractive young widow, Allegra Gray, moves in.  Her late husband was also a clergyman and she has definite ideas about how things should be run so things in the parish get complicated as well.

The novel doesn't have a whole lot of action, but the characters are so well-drawn I was quickly sucked in to the minutia of life in 1950s England.  Pym has been described as a modern-day Jane Austen but what really struck me was that Mildred didn't really remind me so much of one of Austen's heroines as much as Austen herself -- I think if Jane had been living in 1950s England, she would have been very much like Mildred: unmarried, a clergyman's daughter, quietly and wryly observing the lives of the people in her parish.  Though Excellent Women is set in London, it definitely had a the feeling of village life to it.


I grew to love Mildred and her observations, and now I want to read everything by Barbara Pym -- but now I'm annoyed at myself for waiting so long to read this book.  I'm also annoyed that I'm in the middle of the TBR Dare and I am not allowed to check out books at all.   So I'll have to wait until April, but luckily my library has ten more of her books, though I can definitely see myself wanting to own all of them.
Posted by Karen K. at 12:11 PM